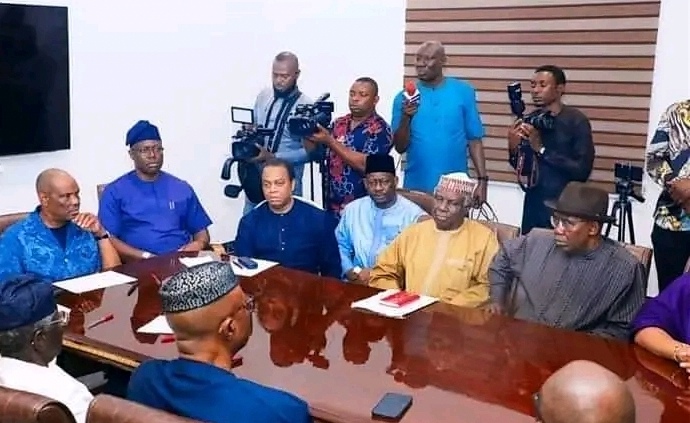 …. the party’s National Chairman undermines the constitution and unity of the party.

They further accused Ayu of compromise, especially in the role he played during the conduct of the party’s May 28 and 29 presidential primary in Abuja.

They also pointed out that their support for Governor Wike is not because he lost the Presidential Primary election or that he was not picked as the Vice Presidential Candidate of the party but their stance for equity and justice in the party.

The camp of Governor Nyesom Wike in the Peoples Democratic Party has officially announced its withdrawal from participating in the presidential campaign of the party for the 2023 elections.

The group made its position known after a long meeting which started at about 7pm last night and ended by past 2am this morning at the private residence of Wike in Port Harcourt, the Rivers State capital.

Members of the group said none of them will participate in whatever capacity in the campaign council unless the National Chairman of the party, Iyorchia Ayu, resigns for a southern candidate.

Some members of the group were recently appointed as leaders and members of the campaign council for the party’s presidential candidate, Atiku Abubakar.

Others at the meeting are elder statesmen, Olabode George, Jerry Gana; South-South Chairman of the PDP, Dan Orbih; former Deputy Speaker of the House of Representatives, Chibudom Nwuche; Senator Suleiman Nazif, Nnenna Ukeje, among several others.

After over seven hours of private meeting from 7pm on Tuesday, September 20 to past 2am on Wednesday September 21, they gather to briefing journalists on the outcome, with George stating the shocker.

The decision of the Rivers governor’s camp comes some days to September 28, the official date for candidates to kick-off campaign as announced by the Independent National Electoral Commission
With the campaigns for the 2023 general elections in Nigeria set to kick off in the next few days, the latest development is surely another setback for the PDP in its quest to win the 2023 general elections.