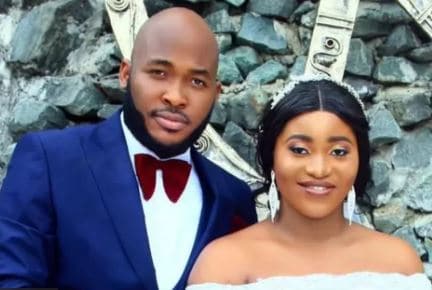 Princess Munachi, wife of Ifeanyi Dimkpa, one of the two people who were allegedly burnt in Abule Ado area of Lagos state is demanding justice over their death.

It would be recalled that Benjamin Ogudoro, 50, was arrested by the Lagos State Police Command for allegedly setting his wife, Chinyere, and his brother-in-law, Ifeanyi Dimpka, on fire at their apartment.

According to reports, the couple had an unknown martial crisis, which led the  46-year-old wife and mother of four who relocated to Scotland for four years to returned to Nigeria when information reached her that her husband was planning to sell the house she built in Nigeria.

However, event took a u-turn after Ogudoro allegedly set the duo on fire, where led to their death.

Speaking about the incident, Munachi said, her  husband, Ifeanyi only went to visit his sister and wasn’t involved in the misunderstanding between the couple before the unfortunate incident happened.

Munachi narrated to BBC Pidgin what her husband told her before he died.

She said, ”Ogudoro went outside shouting that there is fire in his house and pleaded they pour him water without telling the neighbours there were other people in the house.

My husband struggled before he was able to open the gate, unfortunately he had already sustained burns.”

She also alleged that the suspect had locked the water supply so neighbors won’t be able to quench the fire.