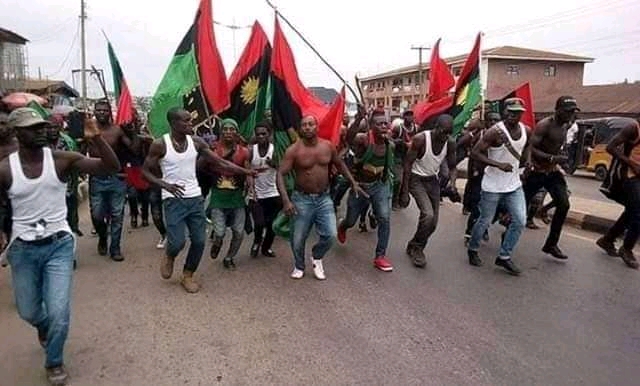 There was a time youths came out to protest peacefully with flags and Igbo leaders used Nigeria Soldiers to shoot to death many of them.

We warned you but you called us names. Elochukwu Ohagi stated.

It happened in Onitsha, Nkpor, Ngwá, Igwe ọcha (Port Harcourt) Aba etc many times. Lots of youths were killed. We warned them to stop killing these youths. We told them that they should not force these youths into unthinkable.

But what did they do? They went into a meeting in Enugu and agreed to use force on their youths.

Lots and lots of youths were killed. 28 youths and one lady died in one compound alone in Umuahia. Lots of bodies were dumped in different borrow pits in South East. Lots more were thrown into prison.

They went on to start abduction of youths. Many were abducted and killed, while many more were thrown into prison.

While these things were happening, no Igbo leader condemned it, except Senator Abaribe. You know why? They all sanctioned it.

They slaughtered families in Ebonyi and Enugu and nothing was done to them. But these same South East leaders killed their own youths.

A young girl was brutally raped in Ihiala, Anambra State, after which they cut her body into pieces, but nothing happened to the group that did that. But they moved against their own people.

We have not forgotten all that happened. Even now the so called Ebube Agụ in Ebonyi are abducting IPOB members in Ebonyi state and disappearing them. This same Ebube Agụ and their governor have done nothing to fulanii herdsmen terrorists.

Lots of IPOB members have been reported killed, but otellectuals are saying that what is happening in Igbo land now have not happened before.

That’s because they heard that some unknown Gunmen attacked people moving around for campaign.

They are now facing their worse fears. They have now seen that the chicken has come home to roast and soon the hunter might become the haunted and they are now shouting.

If they cared for the numerous IPOB members killed, they would have known that what is happening now is nothing compared to what has happened before.

Are we all not here when we woke up and saw more than 100 innocent bodies of Igbo youths floating in Ezu River in Anambra State? Do you know what is 100 bodies? If you have short memories, we don’t. We have documented most of these things and it will be published. Or you don’t know that the souls of these youths have been crying for vengeance.

Those that kill with a knife will go by the knife. You all created whirlwind and you all must reap it. I have written that I saw chaos. I have written that Pandora Box will be opened and I have said politicians will be on the run. You will see it happen. It doesn’t matter how many people you arrest. It doesn’t matter how many more people you kill*. As far as you can’t kill* all the people, more will rise up and soon you all politicians will be on the run. It is a matter of time. I can see it clearly. Just a matter of time.

You have every opportunity to stand with your own people, but instead you killed them. You imprisoned them. You colluded with those protecting bandits and terrorists to go to Kenya to abduct IPOB leader. Yet you want things to remain normal.

Is it that you guys are blind or that you guys don’t think. I pity those who will risk their lives in the name of going out to vote in criminals and looters.