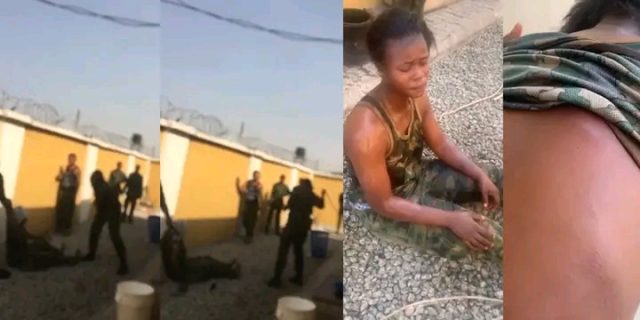 A military source who shared the videos with SaharaReporters added that the female soldier was also detained for several hours in a cell on the orders of a power-drunk lieutenant.

Videos obtained by SaharaReporters show a female officer of the Nigerian Army (name withheld) being assaulted and brutalised by her superiors.

A military source who shared the videos with SaharaReporters added that the female soldier was also detained for several hours in a cell on the orders of a power-drunk lieutenant.

According to the source, the private soldier was beaten publicly by the lieutenant and other officers.

One of the videos shows a male soldier hitting the female colleague with a big stick while another one tried to hold her down. Some others stood by and looked on as the assault went on.

“Na blow oo, we were in class today and Lieutenant slapped the girl, so the girl responded and told her not to slap her again. The officer was very angry, she said so the female soldier had mouth to talk to her.

“So they asked her to go to the guard room, then the two officers and others followed her and started beating her with sticks. She was really brutalized,” the soldier who witnessed the incident said.

The media further gathered that the incident occurred on Wednesday at the Nigerian Army Women Corps in Abuja.

Inaugurated in 2019 under the leadership of former Chief of Army Staff, Lieutenant General Tukur Buratai (rtd), the Nigerian Army Women Corps’ concept was to harness the potential of female officers and soldiers to build a force ready to support the Nigerian Army operations and engagements.

Since its formation, the women’s corps has been playing an active role in various military operations, especially internal security within troubled regions of the country.