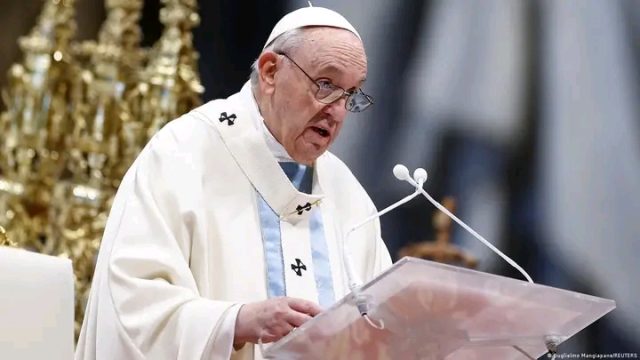 Pope Francis on Wednesday at the end of his audience offered a prayer for the Nigerian Catholic priest, Father Isaac Achi, burnt alive by terrorists who attacked and set his parish rectory ablaze.

The media had reported that Achi was found amid the ashes of St. Peter and Paul Catholic Church parish building after terrorists attacked the church on Sunday.

Hotmedia.ng gathered that the terrorists attacked the church located in Kafin Koro community at 3 a.m. However, another priest at the rectory, Father Collins Omeh, escaped the building with gunshot wounds.

On Wednesday, the National Catholic Register reports that at the end of his audience, Pope Francis offered a prayer for the murdered priest and asked for people to join him in praying for persecuted Christians around the world.

According to the report, Pope Francis while speaking to pilgrims in the Vatican’s Paul VI Hall said, “I ask all of you to join me in praying for Father Isaac Achi, of the Diocese of Minna in northern Nigeria, who was killed last Sunday in an attack on his rectory.

“So many Christians continue to be the target of violence: let us remember them in our prayers!”

The Pope also extended a special greeting to French-speaking pilgrims from the Democratic Republic of Congo (DRC), where he will be visiting at the end of this month.
The pope stressed that this also occurs in countries where Christians form the majority and should be safe from intolerance.

The National Catholic Register also reports that on the same day that Achi was killed in Nigeria, members of the Islamic State of West African Province (ISWAP) bombed a Pentecostal church in the eastern Congolese town of Kasindi, killing at least 14 people and injuring more than 60.

Pope Francis was said to have in a message of condolence after the bombing, expressed his “compassion and closeness to all the families so hard hit by this tragedy.”

It was therefore reported that the Pope’s upcoming trip to Africa will provide an opportunity for him to further highlight the ongoing violence against Christians in the region. On his second day in Kinshasa, he is scheduled to meet with victims of violence from the eastern region of the DRC, where more than 5.5 million people have been displaced from their homes.

Pope Francis has warned of increasing intolerance towards Christians – even in countries where they are not a minority.

The leader of 1.3 billion Catholic church, revealed this in his annual speech to the diplomatic corps accredited to the Holy See on Wednesday.

Decrying that Christians are increasingly suffering for their Faith, Pope Francis said, “I cannot fail to mention, as certain statistics have shown, that one out of every seven Christians experiences persecution.”

The pope stressed that this also occurs in countries where Christians form the majority and should be safe from intolerance, ACN reported.

He said: “We should not overlook the fact that violence and acts of discrimination against Christians are also increasing in countries where the latter are not a minority.

“Religious freedom is also endangered wherever believers see their ability to express their convictions in the life of society restricted in the name of a misguided understanding of inclusiveness.

“Religious freedom, which cannot be reduced simply to freedom of worship, is one of the minimum requisites for a dignified way of life.”

Pope Francis called on governments to protect religious freedom at home and promote it abroad.

He said: “Governments have the duty to protect this right and to ensure that each person, in a way compatible with the common good, enjoys the opportunity to act in accordance with his or her own conscience, also in the public sphere and in the exercise of their profession.”

Pope Francis stressed that restrictions on religious liberty are widespread.

He said: “It is troubling that people are being persecuted simply because they publicly profess their faith, and in many countries religious freedom is limited.

“About a third of the world’s population lives under these conditions.

A similar conclusion was reached by Aid to the Church in Need’s 15th Religious Freedom in the World report, published in 2021, which found that in 62 countries out of a total of 196 there are severe violations of religious freedom.

The media earlier reported that Pope Francis prayed for a Catholic priest, Father Isaac Achi who was burnt alive on Sunday in Niger State, North Central Nigeria by Islamic terrorists.

According to Aid to the Church in Need, in 2022 four priests were murdered in the country, and 28 were kidnapped.

There have been increasing concerns about vicious attacks on Christian communities in Northern Nigeria by Islamic terrorists and jihadists.