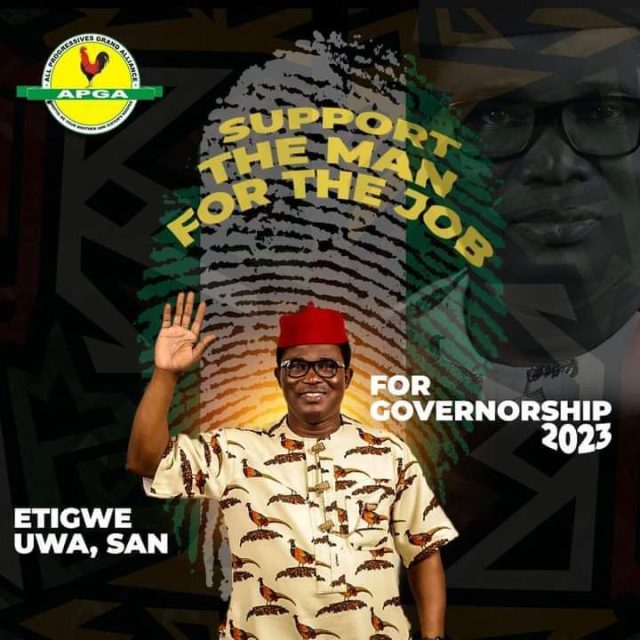 The Etigwe Uwa Abia 2023 campaign organisation has received the news of the judgement of the Federal High Court presided over by Honorable Justice Maha dismissing the pre election action filed against Mr. Gregory Ibe in relation to the the APGA governorship primaries in Abia State.

Whilst extolling the Federal High Court as an institution for the diligence exhibited by its judges in dealing with such an avalanche of preelection cases within the short time limit allowed, we are aggrieved by the decision and have instructed our lawyers to appeal against it.

Our grievance against the judgment include but is not limited to the peremptory refusal of the court to order WAEC to give evidence regarding a clear case of forgery of the WAEC certificate presented by Mr. Gregory Ibe to the party for the purpose of the primaries.

Furthermore, the Court declined an application filed to convert the case from an originating summons to one commenced by writ of summons after the Supreme Court in the David Edevie case ruled that the mandatory provisions of Order 4 of the Federal High Court Preelection practice direction to the effect that all Pre election cases must be commenced by Originating Summons is inapplicable to preelection cases where fraud or illegality or other criminal action is alleged.

The court took almost three months to resolve the said application for conversion inspite of the issue having been settled by the Supreme Court and delivered its ruling on the application only two days ago when it is now virtually impossible to pursue an interlocutory appeal against the said decision and come back to the lower court to conclude the case whose constitutional time limit expires next week.

Today the Court dismissed the objections to those two further affidavits after after the Plaintiff in the case has already suffered the prejudice of the further affidavits not being considered in relation to his application for conversion.

The foregoing would form the basis of the appeal which team of lawyers engaged in the matter would be filing. Whilst we respect the court’s view on the issues, we would take up our matter at the appellate court in exercise of the constitutional right of appeal of our principal.

Our supporters are urged to remain steadfast as our commitment to a restoration and redemption of Abia so that it may flourish remains unshaken. In any event the judgement gives no real joy or victory to Mr. Gregory Ibe as the said primaries have already been set aside by another Judge of the Federal High Court.