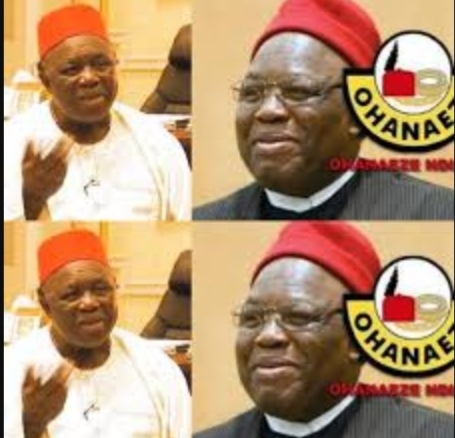 A replacement for Professor George Obiozor, former President General of Ohanaeze Ndigbo, who died a fortnight ago, may be coming soon, giving the signals coming from the secretariat of the main Igbo socio-cultural association, and highest decision making body of Ndigbo.

The Hotmedia.ng gathered that it may be coming through a “doctrine of necessity” to be invoked by elders of the body in order to put a new leader in place, quoting an insider as saying that the the elders – referred to as “Ime Obi” – were working with Okey Emuchay, Secretary General of the body, to have a “speedy election or selection process for an interim president-general.”

The measure is being contemplated since the deputy, Joel Kroham, who is supposed to take over immediately, in line with the succession arrangement contained in the constitution of the Igbo body, died four months earlier.

Obiozor, former Nigerian Ambassador to the US, Israel and Cyprus, was elected on January 10, 2021, and who took over from his predecessor, Nnia Nwodo, was confirmed dead by Imo State Governor, Hope Uzodimma on December 28, two days after the incident was first rumoured in the media.

The report, said that the body saw the loss of both leaders in such a quick succession, had thrown the it into “uncharted territory,” with the Ime Obi, which according to the constitution, “shall be responsible for rapid response of Ohanaeze to urgent issues,” said to be working with the secretariat on the possibility of invoking a doctrine of necessity that would ensure a speedy election or selection process for an interim President General.

Quoting an insider, the report added: “This unprecedented situation was never envisaged for by the drafters of the constitution.”

The Ime Obi is made up of all past and serving Nigerian Presidents, Vice Presidents, Senate Presidents, Speaker of the House of Representatives and Deputy who are of Igbo origin, as well as leaders from each Igbo state nominated by the state and endorsed by the council of elders, President General, Secretary General, 17 national leaders nominated by the council of elders and two members of the National Assembly, representing Senators and House of Representatives members.

The report also said it is currently unclear which state would produce the next interim or substantive executive of the body since the position rotates among Seven states of Anambra, Enugu, Imo, Abia, Ebonyi, Rivers and Delta states, with dominant or heavy Igbo presence.

The presidency of the organisation, would have shifted to Rivers, after Obiozor, who was from Imo State, would have ended his four-year term in January 2025, in line with the alphabetical order of arrangement, which incidentally is the only state that is yet to produce one since the current constitution spelt out the order of leadership arrangements.

“There are arguments for the election of another person from the state to complete the term,” the insider said, hinting at the fact that the organisation’s constitution does not say if someone from Imo should be elected to complete the term of Obiozor or look for another leader in another state.