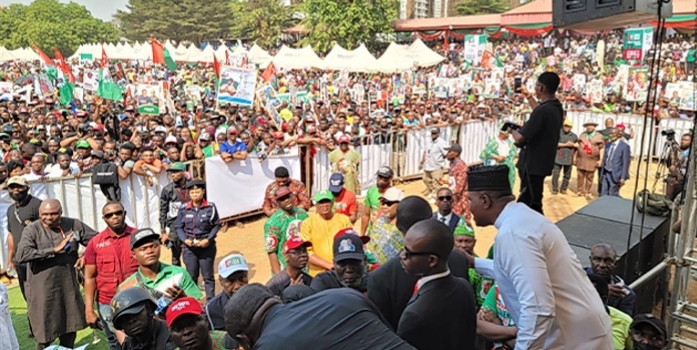 The Labour Party (LP) presidential candidate, Peter Obi, on Tuesday, returned to his home state of Anambra where he and his running mate, Datti Baba-Ahmed, received a hero’s welcome from supporters.

Accompanied by the leadership of the party, the presidential hopeful held a rally at the All Saints Cathedral Church field, Onitsha, during which he vowed to fix Nigeria and bring it to an envious height to the extent that no one would wish to leave for another country.

Greeted by a crowd that occupied the field to maximum capacity and stretched further to nearby neighbourhoods, the former Anambra governor shared his manifesto.

The party leadership described the massive attendance as a clear indication that the people are tired and seek the relief offered by the LP.

Baba-Ahmed, who spoke on his reasons for identifying with Obi, said his principal is a gift to the people of Anambra State and the “most competent” out of all other candidates.

“I believe in justice and that is why I’m with Peter Obi. Between South-East and North-West, there is a strong history of friendliness – in fact, between the whole South and the whole North. To live as one, a leader like Peter Obi must be elected in Nigeria,” the LP vice presidential candidate said.

The National President of the party, Julius Abure, told the crowd that “the light that will rescue Nigeria” is coming from among them.

“Are you not a special generation?” he asked. “Onitsha has always produced great leaders and another one is about to come.”

Political economist Prof. Pat Utomi, in his address, noted that they must have their permanent voter cards (PVCs), adding, “You will make sure that you go to the rural areas, that you talk to all those market women and tell them that it is ‘mama, papa, pikin.’”

A member of the LP Presidential Campaign Council (PCC), Aisha Yesufu, also said the rally was to make a statement that “a new Nigeria is possible.”

Earlier in the day, Obi was in Awka where he interacted with students of Nnamdi Azikiwe University and assured them of smooth and uninterrupted academic sessions in Nigeria void of industrial actions if elected president.

He also met with Anambra traditional rulers at the Conference Hall of the Government House, Awka, where he proffered solutions to challenges of poverty, youth unemployment and drug prevalence which he said he would fight with job creation, and economic stability through production instead of consumption.

REACTIONS FROM NIGERIANS BELOW 👇

Sichi AB:
My Fellow Nigerians We Should Not Misuse This Great Opportunity To Elect Dr Peter Obi And Dr Senator Yusuf DATTI Who Are Very Competent, Industrious, Energetic And Dynamic To Rescue Nigeria From Bad Leaders And Delivered Good Governance That Would Benefit Every Single Nigerians💪🏿

Gabriel Kpanti:
Thank God for OBI DATTI mandate if not our creminal politicians especially here in the North who always use tribe and religion to get cheap vote from us would have use us this time and do yeye. Either Obiyusuful leardership or nothing!

Okah Egberi Timothy:
This defiled a saying that “ a prophet is not loved in his hometown “
Peter Obi is a prophet loved from his own hometown ✅✅

Boniface Elijah:
Those of you who have been asking him to go and campaign in Igbo land, what do you have to say? A good product don’t need too much market strategy,it will market itself.

Engr Precious:
I have said it. I’m not a prophet but that day INEC will declare Obi the winner, embassies and airports will be filled with Nigerians and foreigners wanting to fly into the country.

Somadi Christopher:
God if the only thing u will do for me this year by making Mr peter obi, the president of federal republic of Nigeria next month I am okay with it, we have suffered alot enough is enough.

Michael Wrong:
Anybody that is supporting APC and PDP is doing that because of personal interest and region after 24 year’s in power nothing to show let’s Nigeria try obi and labuour party to see the different.

Allab Ukhami:
Amen Peter Obi, this is the only land we have. If Apc and Pdp politicians can behave like Peter Obi and Yusuf Datti, politics will be very peaceful in Nigeria.