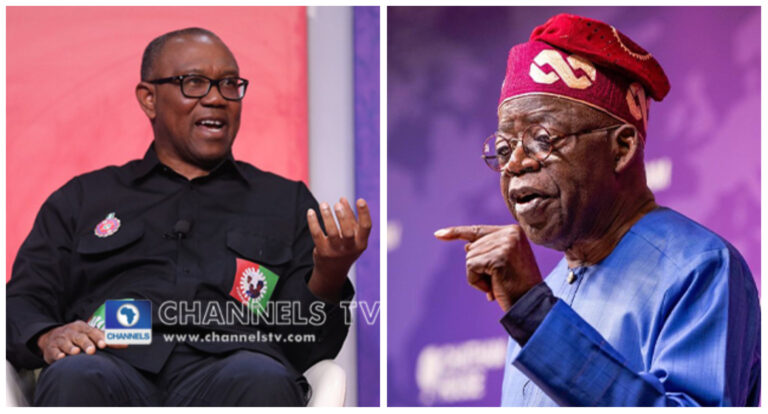 The presidential candidate of Labour Party (LP), Peter Obi, on Sunday, expressed disdain over recent comments by his opponent in the All Progressives Congress (APC), Bola Tinubu, mocking him as ‘Mr Stingy.’

Tinubu in a campaign speech on Saturday alleged that the former Anambra governor watched his people suffer and saved the state’s funds rather than save the people.

But Obi dismissed the remarks, arguing that no one could fault him for refusing to steal public funds.

“It’s good that when my opponents talk. Let us talk about corruption. One of the things that are killing this country today is Corruption Perception Index, which is measured by how you manage public assets, nepotism, how you share the land, how you manage your money, and everything.

“I’ve challenged everyone to say, ‘Go and see whether there is anywhere a kobo of Anambra State money is missing.’ Saving has now become an issue. When people have stolen all the money and impoverished the country and you are now questioning a man who left the money without anybody telling me to leave it and go,” he said.

He noted that between 2000 and 2015, the global benchmark for measuring development was the Millennium Development Goals, adding that he became governor in 2006.

“I won the Bill Gates prize in health. This is again not Nigeria that marked it. I can go on. I had the best road network. In terms of fighting poverty, go and check – ask [former managing director of The Bank of Industry] Evelyn Oputu – I was the first governor to go to the Bank of Industry.

“[I said] ‘I want us to do something. I want to put in money here and you support my micro, and small businesses, which is what the governors are seeing today. I and Evelyn Oputu started that. Go and ask Magnus Kpakol, who was in charge of poverty alleviation; I was number one. I’m calling names of people; I can go on and on,” he said.

The presidential candidate of the Labour Party, Peter Obi, believes women are more productive in Nigeria and are less corrupt compared to their male counterparts.

Speaking during The Peoples Townhall, a live event organised by Channels Television and its partners on Sunday, Obi promised to bring more women into government if elected as the president in the February 25 election.

“I can say it without anything; women are more productive in Nigeria than men any day any time. I worked with them when I was in the banking industry, they saved the bank. When they believe in anything they go for it.

“I wish our men will do the same thing. And they (women) are less corrupt; they are easily satisfied with little. Men will just go on and on forgetting that it is public money they are taking. I am very sorry about that, men. I am one of you but I have to say the truth of what I observed,” Obi said.

To prove how serious he is about giving women good representation in government, the former Anambra State governor recalled how women almost took over his administration serving in key positions.

The LP chieftain promised that his administration will be made up of mostly women and youths because they are hungrier to change the country positively.