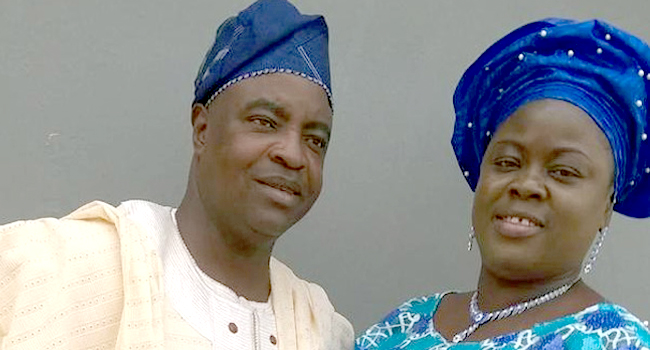 There are indications that the prime suspect in the gruesome murder of a couple, Kehinde and Bukola Fatinoye, in Abeokuta, the Ogun State capital, has escaped from police custody.

The police in the state have yet to confirm this development as an effort to get a reaction from the Police Public Relations Officer, Abimbola Oyeyemi proved abortive.

The prime suspect simply identified as Lekan, it was gathered, escaped from police custody at Ibara Police Divisional Headquarters, after his arrest on Tuesday.

It was alleged that the identity of Lekan, who was the driver to the late Mrs Fatinoye, until Friday, remained a top secret within the police hierarchy.

The suspect was said to have been driving Mrs Fatinoye for almost two years and was well known within the community of the Federal University of Agriculture (FUNAAB), where Fatinloye worked.

Lekan was said to have been arrested following an earlier arrest of another suspect who was a house help to the Fatinoyes.

According to a family source, Lekan was taken into custody at Ibara Police Station after the house help, who also escaped assassination by the assailants, identified him as one of the killers at the scene.

It was further revealed that at the point of taking a statement from Lekan, he slumped and was almost lifeless, not known to the police that it was only an act and a ploy to escape lawful custody.

Lekan was said to have been rushed to a police clinic at Zone II not far from the Secretariat of the Nigerian Union of Journalists (NUJ), Iwe-Iroyin, in order to ‘rescue’ him so as to help the police in its investigation.

While trying to ‘rescue’ him, the source further revealed, Lekan suddenly woke up, caught the health workers unaware, took to his heels and escaped from the clinic.

The source further said that efforts by the police to re-arrest the suspect proved abortive, adding that there were indiscriminate gunshots while the police chased the suspect.

The police have however launched a manhunt for the escaped suspect by declaring him wanted.

A ‘wanted’ message carrying Lekan’s picture has been in circulation since Thursday, but curiously not with any police insignia.

The message read, “Wanted! Wanted!! Wanted!!! This is the guy suspected to have been part of the culprits that murdered a couple in Abeokuta on New Year’s Eve. His name is Lekan. He is currently at large and has been declared wanted by the Police. Anyone who knows or sees him should contact the nearest police station.