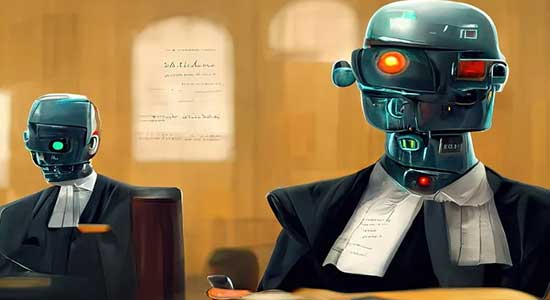 The “world’s first robot lawyer” will take a case in court next month — with the artificial intelligence (AI) legal assistant helping a defendant fight a traffic ticket.

The AI, billed as “the world’s first robot lawyer” by the startup that created it, DoNotPay, will run on a smartphone and listen to court arguments in real-time before telling the defendant what to say via headphones.

The unprecedented hearing is slated to take place sometime next month, but the makers of the robot lawyer are not disclosing the location of the court or the name of the defendant.

Science and technology publication New Scientist reported that the ticket at the center of the trailblazing case was issued for speeding, and the defendant will only say in court what the AI instructs them to say.

Should they lose the case, DoNoPay has agreed to cover any fines, according to the company’s founder and CEO, Joshua Browder.

Browder, a Stanford University-educated computer scientist, launched DoNotPay in 2015 as a chatbot that provides legal advice to consumers dealing with late fees or fines, but the company pivoted to AI in 2020.

Browder said it took a long time to train DoNotPay’s AI assistant on case law covering a wide array of topics — and to ensure the app sticks to the truth.

“We’re trying to minimize our legal liability,” Browder told the outlet. “And it’s not good if it actually twists facts and is too manipulative.”

The AI app’s software was adjusted so it does not automatically react to everything it hears in court. Instead, it will listen in on the arguments and analyze them before instructing the defendant how to respond.

Browder explained that his ultimate goal is to have his app replace some lawyers altogether in order to save defendants money.

“It’s all about language, and that’s what lawyers charge hundreds or thousands of dollars an hour to do,” he said.

“There’ll still be a lot of good lawyers out there who may be arguing in the European Court of Human Rights, but a lot of lawyers are just charging way too much money to copy and paste documents and I think they will definitely be replaced, and they should be replaced.”

Besides acting as a legal assistant in a court of law, DoNoPay promises users to “fight corporations, beat bureaucracy and sue anyone at the press of a button.”

According to Browder, his company’s AI begins by asking the client what the legal problem is, then finds a loophole and turns that loophole into a legal letter, which it can send to the right institution, or upload to a website.

Browder explained in a promotional video that he started his company “by accident” after moving to the US from his native UK to attend Stanford.

While in school, he began accumulating parking tickets, which he could not afford to pay. So Browder said he became “an expert” on loopholes that would allow him to get out of paying the fines.

As a software engineer, Browder said he realized that the tedious process of writing legal letters to appeal parking tickets could be automated, so that’s what he did, creating a website where people could challenge their parking tickets.

“The goal of this company is to make the $200 billion legal profession free for consumers,” Browder said.