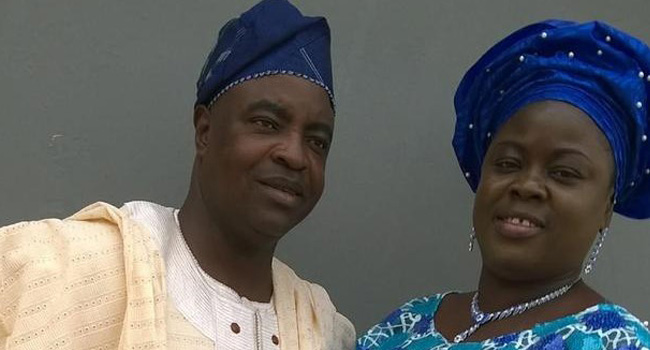 A couple – Kehinde Fatinoye and Bukola – has been killed in a mysterious fire incident shortly after returning from a New Year/Crossover service in Abeokuta, Ogun State.

A suspect has been arrested in connection with the death of the duo who reside in the Ibara Government Reservation Area of the capital, the Ogun State Police Command spokesman Abimbola Oyeyemi told our correspondent

The suspected arsonists are believed to have trailed the couple to their private residence before setting the home ablaze.

According to the police spokesman, the suspected arsonists also kidnapped the victims’ son alongside the housemaid and threw them into a river along the Adigbe-Obada axis of the town.

Until his death, Kehinde was a staff of the Central Bank of Nigeria (CBN) while his wife Bukola worked with the Federal University of Agriculture, Abeokuta.

The victims were said to have been burnt beyond recognition with their remains later packed by policemen and health officials at the scene and driven to the hospital in an ambulance.

Hundreds of symphatizers at the house were seen profusely crying over the sad development.

Speaking further, Abimbola said that investigations to unravel both the immediate and remote causes of the incident have been launched by the police command. He also assured that justice will be served.