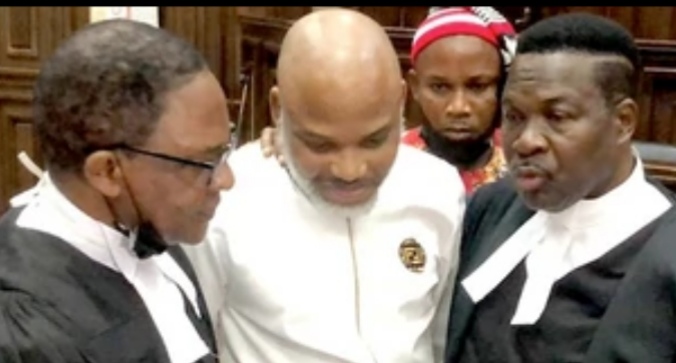 … Ozekhome asked the court to compel the DSS to grant Kanu unhindered access to his medical doctors.

Chief Mike Ozekhome (SAN), the lead counsel for the embattled leader of the Indigenous People of Biafra (IPOB), Nnamdi Kanu, has raised the alarm over the separatist leader’s health.

According to Ozekhome, the IPOB leader lacks potassium in his bloodstream and may need “urgent heart surgery”, reported Saturday PUNCH.

This comes as the SAN and his team of over 18 lawyers signed a notice of application for an Order of Judicial Review (Order 34) in the Federal High Court in the Abuja Judicial Division, Abuja.

The suit marked, FHC/ABJ/CS/2341/2022 and dated December 20, 2022, sought to enforce the order of the Federal High Court on October 21, 2021, that the State Security Service should grant Kanu “unhindered access” to his medical doctors to enable them to conduct an “independent examination of his present deteriorating health condition.”

READ ALSO : Lady Shows Her Pὺṡṡy On TikTok As She Removes Her Clothes In Trending Video

Ozekhome also prayed the court grant leave to Kanu to compel the DSS to avail him with “all his medical records from June 29, 2021, to date, including but not limited to the admission records, medical and clinical records, nursing notes, observation charts and documentation during treatment or stay in the hospital, laboratory test results, pharmaceutical records, radiological scan, images and reports, blood transfusion records and physiotherapy and rehabilitative treatment records”, among others.

The document further stated that the “abduction” of the IPOB leader from Kenya and the subsequent brutal torture and inhuman treatment meted out to him have worsened his health condition.

The lead counsel also disclosed that Kanu suffered a mild cardiac arrest before he was “smuggled” back into Nigeria, adding that his health condition has continued to take a nosedive since then.

Ozekhome’s words: “That various medical personnel that attended to the Applicant whilst in custody had repeatedly informed him that they could not ascertain the reason for the depletion of potassium in the applicant’s blood.

“That on various occasions, the medical personnel brought by the respondents took the applicant’s blood sample and allegedly transported same to South Africa for screening; and up till the present, there is no end in sight for their trial-and-error medicare.”