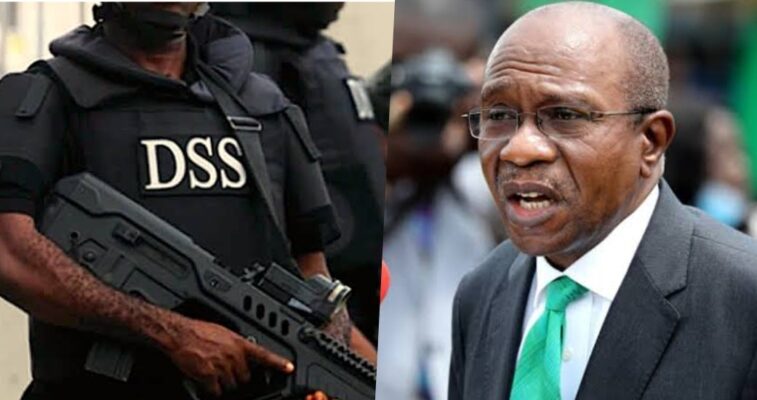 The Department Security Service has started exercising a be-on-the-lookout for Governor Godwin Emefiele of the Central Bank of Nigeria, according to two officials familiar with the matter.

According to the Peoples Gazette reports, an DSS officer familiar with the matter said the deployment came from an assistant director and could not immediately say whether or not Director-General Yusuf Bichi signed off on it.

“We have different teams of at least two each monitoring those places,” the officer said under anonymity to disclose cursory specifics of an ongoing operation. “We don’t know if they have more people deployed to even more places, but we did not see any signal from the DG’s office to suggest his involvement at this point”

The officers were still quietly monitoring the locations as of Saturday morning, The Gazette was told. Christopher Emefiele did not comment on whether or not he had noticed the presence of state agents near his property. Mr Emefiele’s phones rang through on Saturday morning and his wife Margaret declined a request seeking comments.

The development comes as Mr Emefiele’s whereabouts became fuzzy after learning of an active threat to take him into custody by the SSS. The agency unsuccessfully sought a warrant from the Federal High Court earlier this month, with a federal judge ruling that sufficient probable cause was not established for the issuance of a warrant against a sitting governor of the nation’s banker and foremost regulator of the banking sector.

In the application ex-parte, an action filed to the exclusion of its defendant, the SSS asked the court to order Mr Emefiele’s arrest on account of terrorism financing and economic sabotage, among other nefarious acts.

But Justice John Tsoho said he didn’t see enough evidence in the SSS application and bemoaned the agency’s failure to take him into confidence.

“It therefore seems that the applicant intends to use the court as a cover for an irregular procedure, which is unacceptable,” the judge ruled on December 13.

Mr Tsoho, however, said the SSS could still take Mr Emefiele in as part of its mandate as a federal law enforcement outfit. The CBN governor does not enjoy constitutional immunity from arrest or prosecution while in office.

CBN officials said Mr Emefiele had not been seen at work since he joined other top Nigerian officials who accompanied President Muhammadu Buhari to Washington D.C. for a string of political and business engagements in the United States capital between starting December 11. Mr Buhari returned to Abuja shortly before 5:00 a.m. on December 18, but Mr Emefiele has remained out of public view.

But officers suspected Mr Emefiele was not in Nigeria and might linger abroad to avoid being arrested. But for how long Mr Emefiele could remain in hiding or avoid stepping into Nigeria while running the central bank would ultimately rest with the president to decide.

Justice Tsoho said he weighed the economic ramifications before quashing the SSS’ request to arrest Mr Emefiele, but analysts said it was possible the allegations’ wide publicity could already take a negative toll on the economy — without necessarily saying how steep at this point.

According to Peoples Gazette, “a CBN spokesman declined comments about Mr Emefiele’s whereabouts”. The presidency has not commented on the matter.

The CBN governor has seen support from civic groups, with many saying he has become the latest victim of power play ahead of general elections due February.

Mr Emefiele sought the presidential ticket of the ruling All Progressives Congress during primary season earlier this year but later backed down after being told he must step down from office before engaging openly in partisan politics.

He also recently issued a controversial directive that limited withdrawals from bank accounts to N100,000 ($130) per week. Economists slammed the policy as senseless and excessive, warning it would rapidly exacerbate harsh economic conditions across the country. But central bank officials said the move was to suffocate ongoing moves by politicians to warehouse cash that would be used to bribe voters at the ballot box.

Before then, the governor had announced a sudden redesign of naira notes, which would have rendered any previously stockpiled banknotes invalid for election use.

Supporters said the moves made Mr Emefiele a target of some corrupt politicians, with the opposition Peoples Democratic Party all but naming ruling APC’s presidential candidate Bola Tinubu as the mastermind. The SSS has a history of being used to settle political scores, including the assassination of regime opponents.

The controversial policy was reversed earlier this week, but it was unclear whether or not Mr Emefiele took the measure to placate the SSS.

An SSS official said there are internal fears the agency was becoming too politicised to the point of distraction for career officers willing to focus only on their national security assignments.

“We are very concerned at this point,” the agent said. “We don’t know what Emefiele did, and no one is telling us what he did; we are only tasked with bringing him in for questioning.”

“That is too political for us, and I am not the only one here worried about this,” the officer added.

A spokesman for the SSS said he was not immediately available to discuss matters relating to Mr Emefiele. Peoples Gazette reported.