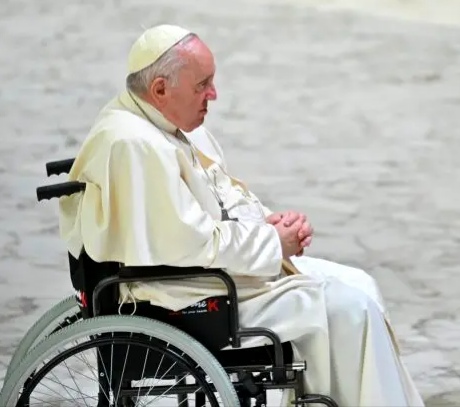 … I will step down in a case of heath failure says the Pope.

Pope Francis revealed for the first time in an interview on Sunday that he had signed a resignation letter nearly a decade ago should poor health prevent him from carrying out his duties.

Francis — who turned 86 on Saturday — has said in the past that he would step down from the papacy should health problems keep him from his duties.

In Spanish newspaper ABC, the pontiff said he signed his resignation letter and handed it over to the Vatican’s secretary of state, Tarcisio Bertone, before that cardinal’s retirement in 2013.

Pope Francis has said the time may soon come when he needs to consider stepping down – and would do so if he felt his health meant that could not serve in the way he should.

“I signed the resignation and I told him, ‘In case of medical impediment or whatever, here’s my resignation. You have it’,” the pope said.

Asked by the interviewer whether he wanted that fact to be known, Francis replied: “That’s why I’m telling you.”

He added that he didn’t know what Bertone subsequently did with the letter.

READ ALSO : What Is The Annual Salary Of Pope Francis? The Answer Might Surprise You

Francis has been limited in his ability to walk by an inoperable knee condition which has forced him to rely on a wheelchair in recent months.

The pope has had to cancel or curtail activities several times over the past year because of pain and in an interview in July he acknowledged that he needed to slow down.

“I think that at my age and with this limitation, I have to save myself a little bit to be able to serve the Church. Or, alternatively, to think about the possibility of stepping aside,” he said.

Over recent months Pope Francis has suffered ongoing knee trouble that has impacted his mobility. He spent much of his visit to Canada in a wheelchair.

But he has previously dismissed speculation about more serious, life-threatening illnesses.

Did the Pope’s apology in Canada go far enough?…

During his trip to Canada, the pope donned an indigenous feathered headdress before going on to say the forced assimilation of native peoples into Christian society destroyed their cultures and severed their families.

“Pope Francis apologised for Christian support of the “colonising mentality” of the times” and added: “With shame and unambiguously, I humbly beg forgiveness for the evil committed by so many Christians against the indigenous peoples.”

More than 150,000 native children in Canada were forced to attend state-funded Christian schools from the 19th century until the 1970s in an effort to isolate them from the influence of their homes and cultures in an effort to “Christianise” and assimilate them into mainstream society”.

“This trip has been intense,” he said. “I don’t think I can keep travelling with the same rhythm I used to at my age and with the limitation of this knee.

“I either need to save myself a little in order to continue serving the Church, or I need to consider the possibility of stepping aside.”

He has previously said he could follow in the footsteps of Pope Benedict, who in 2013 became the first pope in 600 years to resign instead of rule for life.

The Pope – whose predecessor Benedict XVI retired due to ill health in 2013 – did say that he was keen to visit Ukraine soon, but would have to seek advice of his doctors first.