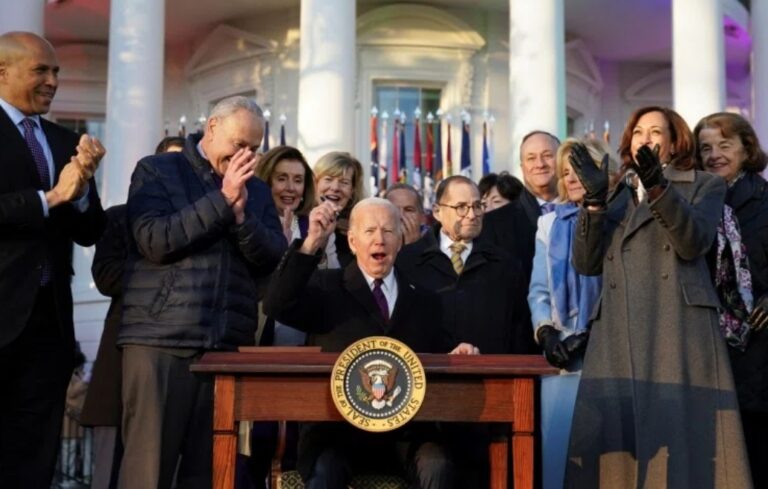 President Joe Biden invited thousands to celebrate at the White House on Tuesday as he signed into law gay marriage legislation before a bipartisan crowd that reflects growing acceptance of same-sex unions.

The triumphant mood played out against the backdrop of a right-wing backlash over gender issues, which has alarmed gay and transgender people and their advocates.

“Congress has restored a measure of security to millions of marriages and families,” Biden said in a statement when the legislation passed last week. “They have also provided hope and dignity to millions of young people across this country who can grow up knowing that their government will recognize and respect the families they build.”

The signing will mark the culmination of a monthslong bipartisan effort sparked by the Supreme Court’s decision in June to overturn Roe v. Wade, the 1973 ruling that made abortion available across the country.

In a concurring opinion in the case that overturned Roe, Justice Clarence Thomas suggested revisiting other decisions, including the legalization of gay marriage, generating fear that more civil rights could be imperiled by the court’s conservative majority.

Lawmakers crafted a compromise that was intended to assuage conservative concerns about religious liberty, such as ensuring churches could still refuse to perform gay marriages.

In addition, states will not be required to issue marriage licenses to same-sex couples. But they will be required to recognize marriages conducted elsewhere in the country.

Majority of Republicans in Congress still voted against the legislation. However, enough supported it to sidestep a filibuster in the Senate and ensure its passage.

“Together, we showed that it’s possible for Democrats and Republicans to come together to safeguard our most fundamental rights,” Biden said.

Tuesday’s ceremony will mark another chapter in Biden’s legacy on gay rights.

He memorably and unexpectedly endorsed same-sex unions in a television interview in 2012, when he was vice president. Days later, President Barack Obama announced that he also supported gay marriage.

Attendees will be given a card commemorating Biden’s comments from his 2012 interview.

“What this is all about is a simple proposition: Who do you love?” Biden said on NBC’s “Meet the Press” a decade ago. “Who do you love and will you be loyal to the person you love? And that is what people are finding out is what all marriages at their root are about.”