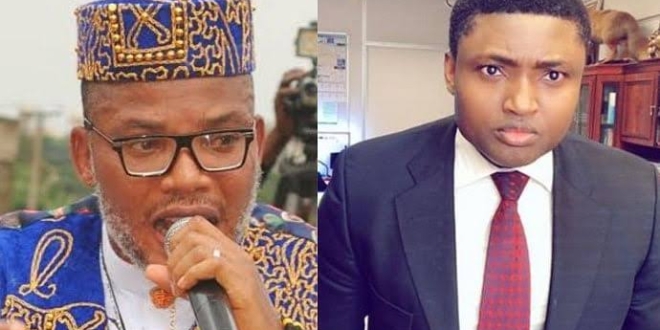 A factional leader of the Indigenous People of Biafra, Mr Simon Ekpa, has placed ban on political campaign in the Southeast.

The Finland-based Ekpa made this known through a statement on his Twitter page.

The order is seen below:

“Immediately sit at home ends on 14th December 2022. The cleanup of Biafraland will start. We don’t want to see any Nigeria political poster, flyer, billboard or any road banner anywhere in Biafraland. Let us keep our street clean. 84days to go. We move in wotowoto”

Ekpa has gunmen loyal to his proscribed group to enforce the ban.

It can be recalled that few days ago Simon Ikpa ordered five days sit-at-home in South-East.

“Ikpa had in a video that went viral, stated that the sit-at-home was in “preparation for the exit of Biafra from Nigeria.”

” In a swift reaction however, IPOB, condemned Ikpa’s announcement and urged the people of the South-East zone to ignore the call on them to observe the 5-day sit-at-home”.

Ikpa, described by IPOB leadership as a “faceless idiot” working for forces against the actualization of Biafra project said by ordering the sit-at-home, Ikpa wanted to unleash hardship on the people of the South East under the guise of fighting for Biafra, so that the people would reject the agitation.

“The people called for a more pragmatic way of fighting for Biafra than the incessant sit-at-home which they said is crippling the economy of the South East”.

In Owerri  a report by Daily Sun newspaper indicates that the sit-at-home order issued by the Simon Ekpa faction of the Indigenous People of Biafra (IPOB) turned bloody on Friday, December 9 across Imo and in Enugu as gunmen wrecked havoc at various locations in both states.

No fewer than three policemen were killed, alongside a pregnant woman and eight others.

A police van, market, shops and goods were also burnt in the process.

In Imo, the gunmen stormed Mbaitoli near Owerri killing Prince, Iheme the elder brother of a popular Nollywood actor, Osita Iheme, aka Pawpaw.

The victim was shot dead while riding in the same vehicle with the state commissioner for solid minerals, Martins Eke who received machete cuts from the attackers.

A policeman was also shot dead at 7up Junction, in Orji.

The sit-at-home enforcers also took their brutality to a location along Owerri-Okigwe road where they killed four persons.

They later kidnapped two expatriates supervising the ongoing construction of the Phase 11 of the Owerri-Okigwe road.

At Umuna junction, the gunmen were reported to have also killed two other persons. At Mgbidi community in Oru East, the enforcers shot sporadically to disperse traders.

It was learnt that some police officers were allegedly killed in a shootout with the gunmen, while the police neutralised many of the bandits, forcing the survivors among them to flee with bullet injuries.

In Anambra state, a trending video believed to have been recorded in Osumenyi community in Ihiala local government saw a group of young hoodlums enforcing the 5-day sit-at-home.

They kept moving from shop to shop, breaking and stealing the goods and later rode away on motorcycles.

Punch newspaper reports that three persons, including a pregnant woman, were killed in Enugu on Saturday, December 10 by hoodlums enforcing the Finland base terrorist, Simon Ekpa’s five-day sit-at-home order in the region.

The pregnant woman, whose identity could not be immediately ascertained, was killed by a stray bullet at New Market during a gun duel between the hoodlums and policemen.

Sources quoted in the report said that a bullet hit the woman who came for early morning market where she hid in a store.

•5-day sit-at-home: Igbo elders speak out, tell residents what to do ;

Recall that elders in the southeast region recently called on residents of various states to reject the five-day sit-at-home declared by Finland-based Terrorist Simon Ekpa.

The Igbo Elders Consultative Forum led by a former Governor of Anambra State, Chukwuemeka Ezeife, described Ekpa’s order as draconian with the tendencies of epitomising insensitivity to the plight of Ndigbo.

Speaking to journalists in Abuja on Thursday, December 8, the leader of the pan-Igbo socio-political organisation said the five-day sit-at-home order must never be adhered to.

On his part, the 2023 presidential flag bearer of the Peoples Democratic Party, Atiku Abubakar has said that the sit-at-home order in the southeast cannot continue to be observed by the people in the region.

Atiku promised that once elected into office as president of Nigeria, he will ensure that all contributory factors to the Biafra agitation in the region are addressed.

The former vice president also noted that the continued destruction of people’s businesses for failing to observe the sit-at-home is hurting the region’s economy.