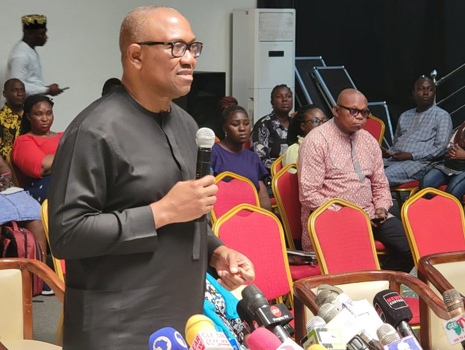 The presidential candidate of the Labour Party, Peter Obi, says securing and uniting the country will bring down food inflation which has been accelerated in recent times.

The former Anambra State governor made the assertion during an interactive session with the leadership of the Christian Association of Nigeria (CAN) in Abuja on Tuesday.

“The country is failing. So, what are we going to do? Secure and unite the country! It is critical because when you secure the country you are able to bring your farmers back to the farm and that alone will start bringing down your food inflation,” Obi told the Christian umbrella body.

He commended CAN for its strategy document for presidential candidates, saying the content is so complete that whoever implements everything in it has achieved all there is to achieve.

[READ ALSO]: 2023: I Believe In Your Strategy Document, Atiku Tells CAN.

I just arrived at the venue of the Presidential Dialogue with Christian Association of Nigeria (CAN) in Abuja. -PO pic.twitter.com/uohTXwRlDa

Obi added that the documents reminded him of what he has always said which is that Nigeria is not bereft of ideas and solutions, but lacks the institutional framework and the political will to do the right thing.

The Labour Party candidate reiterated what is now a singsong for him that the country must move from consumption to production which will remove what he described as the current sharing formula with the production formula.

On the falling value of the naira, Obi said it can be resolved by making Nigeria a producing and exporting country, as the rate of a currency is driven by reserves and exports.

“If you don’t have reserve or export you have a problem, and that is what I am saying now. We are not producing anything; we are not exporting anything,” he added.

Obi attended the interactive session – hosted by CAN for presidential candidates and their running mates –  alongside some top officials of the Labour Party. His running mate, Yusuf Datti Baba-Ahmed, was absent but Obi said he couldn’t attend because of a flight delay in Lagos.

CAN has also hosted the presidential candidate of the All Progressives Congress (APC), Bola Tinubu as well as that of the Peoples Democratic Party (PDP), Atiku Abubakar.