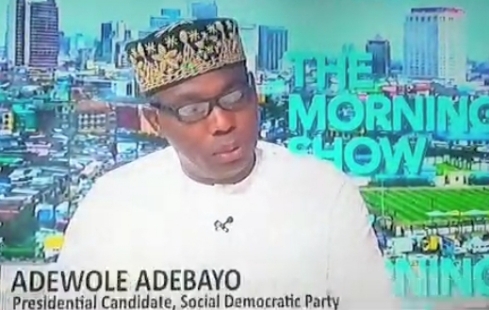 The presidential candidate of the Social Democratic Party (SDP), Prince Adewole Adebayo has given insights into reasons why Nigeria’s police system is inefficient, pledging that his administration will make Nigeria police system effective if elected president in 2023.

Adebayo who spoke on Sunday at a town hall series for presidential candidates organised by ARISE TV in collaboration with the Centre for Democracy and Development (CDD), noted that the there are two steps to take to eliminate crime in Nigeria.

“So, it is not in the interest of the government as it is today to have effective police. But they need the police for very important persons (VIPs) protection. So, I will make that difference.”

“The second stage is for long-term peace in the country. This is to talk to Nigerians, especially those in parliament at the federal and state levels, to see where we can create a system where the policing is done at the level closest to where the crime is.

“The most important thing that should happen in this country today is that law enforcement, and rule of law must go away from the hand of the government to a police and judicial system that is independent of the government. That is the mechanism that I will put in place,” he said.

Read Also : Corruption: Half Of Those In Government Should Be In Jail – SDP Presidential Flag bearer Adebayo

The SDP presidential candidate added that if elected he will ensure that the police and judiciary are out of the control of politicians.

“The first thing for me as president is to ensure that I deliver the federal mandate,” he said.