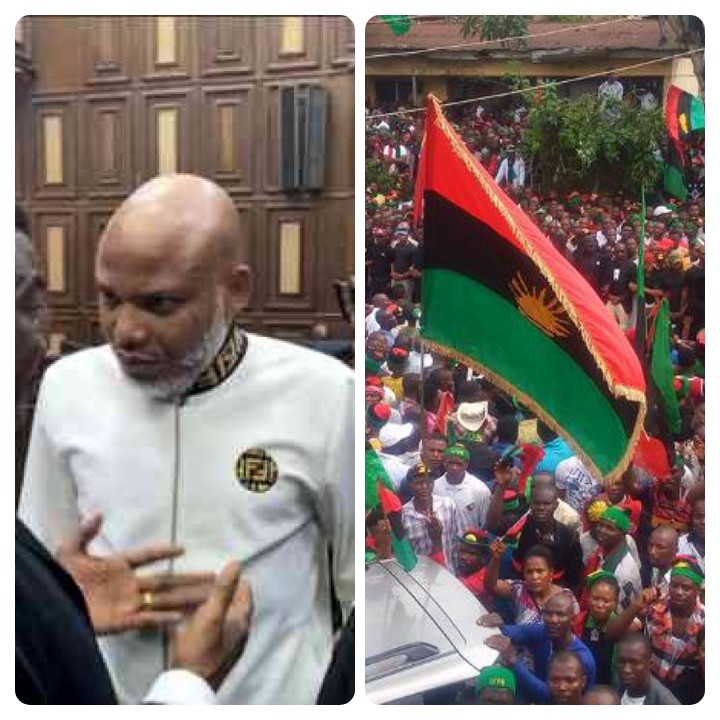 The members of the Indigenous People of Biafra on Friday protested in Aba, Abia State over the non-release of their leader, Nnamdi Kanu by the Federal Government.

The protesters vowed not to allow the 2023 election hold in the South East if their leader was not released and Biafra granted them.

They urged Nigeria to forget 2023 election in South East “if our leader, Nnamdi Kanu, is still in DSS custody”.

The protest which was held in Abia South local government areas was peaceful, non-violent and was monitored by security agencies.

The protesters warned that they would be forced to not only shutdown the economy of the state and South East, but the entire country until their leader was released from the detention.

“Some of the courts asked that they should take our leader back to Kenya where they illegally abducted him from.

“This is part of our renewed warning signal to the federal government that they should forget 2023 elections in the southeast if they continue to detain Nnamdi Kanu”, the protesters said.

Read Also : 2023: God Hasn’t Told Me There Will Be Election – Pastor Adeboye

Chanting solidarity songs, the protesters carried placards some of which read, “Release our leader, Nnamdi Kanu without delay”, “grant us the state of Biafra immediately”, “there will be no election in Igbo land in 2023”, and “what we need is referendum for Biafra.”

The protesters warned residents to keep of the streets of the city on Monday as next week’s sit-at-home will be thoroughly monitored.

Meanwhile, Kanu’s family in Isiama Afaraukwu in Umuahia has expressed their fears that there might be more intense protest by the group in the days ahead.

The younger brother of Kanu, Emma Kanu, expressed this fear early Saturday morning, stating “There might be more protests coming out and it might be more massive this time.

“What they are simply saying is that the government of the day must obey the court order.

“It is as simple as that. You made the laws and is duty bound to obey them.