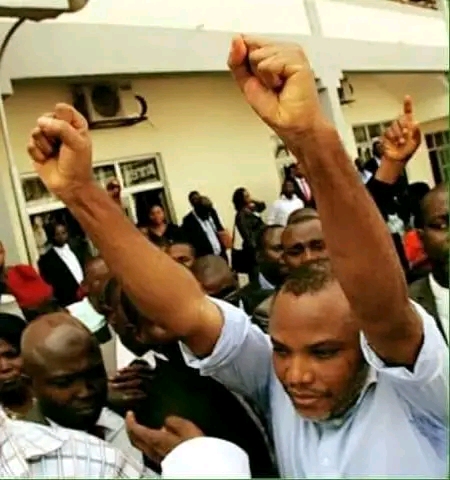 The Appeal Court sitting in Abuja has discharged the embattled leader of the Indigenous People of Biafra, Nnamdi Kanu.

Kanu is being prosecuted by the Federal Government at the Federal High Court in Abuja for 15 count charges bordering, including treasonable felony and terrorism, offences he allegedly committed in the course of his separatist campaigns.

A three-man panel of the Court of Appeal said the Federal High Court lacks the jurisdiction to try him in view of his abduction and extraordinary rendition to Nigeria in flagrant violation of the OAU convention and protocol on extradition.

Read Also :  IPOB Members Are Not Terrorists; I Meet, Live With Them Without Threats – Peter Obi

The court held that the 15-count charge preferred against Kanu did not disclose the place, date, time and nature of the alleged offences before being unlawfully extradited to Nigeria in clear violation of international treaties.

Treason charges
Mr Kanu has repeatedly called for the breakaway of a significant chunk of southern Nigeria to form the Republic of Biafra.

On October 2015, he was arrested by Nigerian authorities on an 11-count charge bordering on “terrorism, treasonable felony, managing an unlawful society, publication of defamatory matter, illegal possession of firearms and improper importation of goods, among others.”

He was granted bail on April 2017 for medical reasons.

However, Mr Kanu fled the country in September 2017 after an invasion of his home by the military in Afara-Ukwu, near Umuahia, Abia State.

He was then sighted in Israel and later continued to rally his supporters in Nigeria to employ violence in achieving secession.

“He has, upon jumping bail, been accused of engaging in subversive activities that include inciting violence through television, radio and online broadcasts against Nigeria and Nigerian State and institutions,” Minister of Justice, Abubakar Malami said after Kanu was rearrested and brought back to Nigeria in June 2021.

“Kanu was also accused of instigating violence especially in the Southeastern Nigeria that resulted in the loss of lives and property of civilians, military, para military, police forces and destruction of civil institutions and symbols of authorities.”

Mr Kanu has denied any wrongdoing.