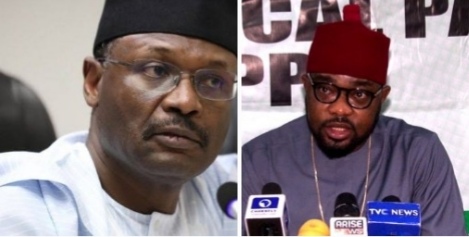 Opposition political parties in Nigeria under the aegis of the Coalition of United Political Parties (CUPP) have raised the alarm over an alleged plot to truncate the 2023 elections process.

Addressing a joint news conference in Abuja on Wednesday, the spokesman for CUPP, Ikenga Ugochinyere alleged plot by some governors to cause a leadership change in the electoral management body which will consume top officials including the chairman, Mahmood Yakubu as well as some national commissioners who are insisting on the use of the BVAS.

CUPP also alleged plot to stop electronic transmission of the 2023 election results and deactivate the Bi-modal Voter Accreditation System (BVAS) from the server of the Independent National Electoral Commission (INEC) during the 2023 general elections.

He said there is immense pressure on the leadership of INEC to deactivate the BVAS from the server.

The opposition coalition, however, announced plans to petition the British High Commission and the United States Embassy and alert them of the alleged conspiracy which threatens the Nigerian electoral process and regional stability while urging them to keep vigilant eyes on the process as development partners.

Meanwhile, the All Progressives Congress debunked CUPP’s claims of mounting pressure on INEC to deactivate the BVAS or cause the chairman of the commission to resign.

Fielding questions from journalists in Abuja after a tripartite meeting of the National Working Committee of the party, spokesman for APC Presidential Campaign Council, Festus Keyamo said the allegations are unfounded.