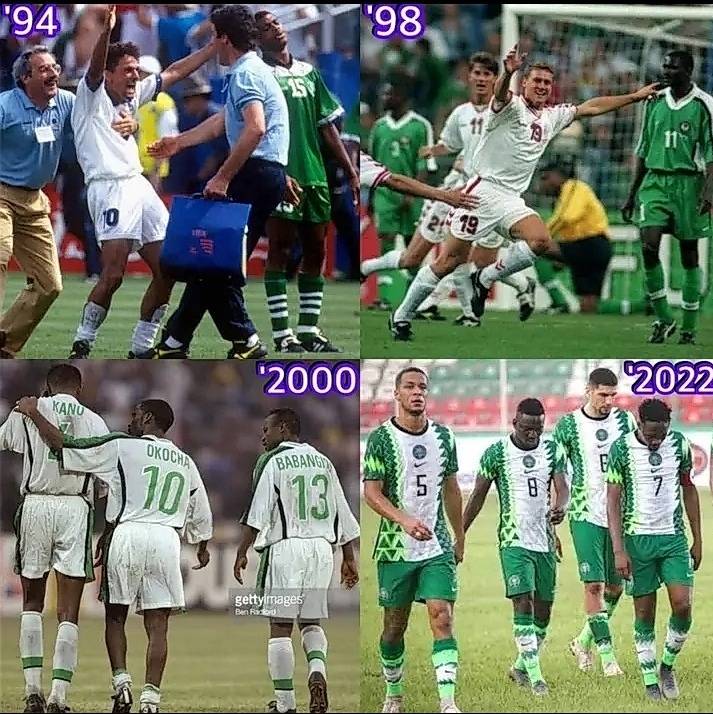 Nigeria was 2 minutes away from reaching the quarter-finals of the world cup for the first time in their very first appearance.

In the round of 16 game, Nigeria showed dominance at the start of the game. Emmanuel Amuneke had scored in the 25th minutes of the game to give Nigeria the lead against Italy. To make matters worse for the Italians, Zola was shown a straight red card for retaliating against Eguavoen and they played with ten men for the rest of the game. Nigeria was 1 nil up in the 88th minute, and it felt like we will be reaching the quarter finals. However, this wasn’t the case. Italy got the equalizer with only 2 minutes left courtesy of Roberto Baggio. Then in extra time, Italy was awarded a penalty in the hundred and second minutes, and Roberto Baggio scored to give Italy the lead and send them to the quarter finals.

Four years after the 1994 heart break, many fans thought Nigeria was going to make up for it in 1998 and we started on a very good note defeating Spain (3-2) and Bulgaria (1-0) in the group stage to secure qualification to the next round before losing the final group game 3-1 to Paraguay although we still won the group. Then came the round of 16 against Denmark. Many people thought we were going to win this easily with some even looking forward to the quarter final game against Brazil. However, the fans were disappointed after the super eagles lost to Denmark 4 goals to one in the round of 16.

This loss was really painful. Cameroon had beaten Nigeria in the African Nations Cup finals of 1984 and 1988 and Nigeria was determined to lift the trophy this time around on home soil. However, Cameroon started strong, scoring two goals in about 30 minutes in the first half.

Chukwu Ndukwe then scored a much needed goal for Nigeria just before half-time. Then Jay-Jay Okocha marked his return to the team after a one-match suspension with a stunning long range shot to make it 2-2 within 90 seconds of Chukwu’s goal. Nigeria, unbeaten at home for 19 years and defending an 11-match unbeaten run in the tournament, took the game to extra-time. Then came penalty shootouts, Cameroon won 4-3 on penalties. However, the win was controversial after Victor Ikpeba’s fourth penalty for Nigeria was not awarded by the referee despite appearing to cross the line after hitting the underside of the crossbar. And that was how Cameroon lifted the trophy in Lagos yet again defeating Nigeria in the finals of the AFCON.

Nigeria failed to qualify for the 2022 Qatar FIFA World Cup after a 1-1 draw with Ghana at home. Thomas Partey had put Ghana in front early in the first half before Troost Ekong converted a penalty to keep the game levelled. However, the Super Eagles couldn’t find the crucial second goal, breaking the heart of millions of Nigerian football fans.

The first leg game in Ghana had ended in a goalless draw leaving the Ghanaians to qualify on the away goal rules. Defeat was a massive blow for many Nigerians. We lost the Jollof Derby. In fact after Nigeria’s failure to qualify for the world cup, fans stormed the pitch and began destroying properties.