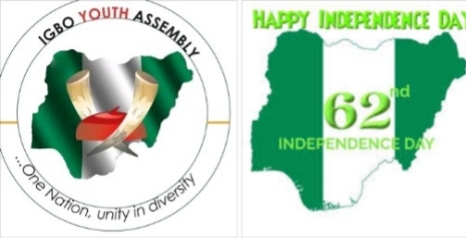 An Igbo socio-cultural youth organization known for promoting National unity and peace, Igbo Youth Assembly Worldwide have called on government to instil ‘true federalism’ in Nigeria to uphold the unity and integration of the country. The call was made as Nigeria celebrate 62 independence anniversary.

In a press statement signed by the President general and secretary general of the Assembly, Comrade Casmir Nnadozie Irekamba and Mazi Leo Chidi Chielo respectively on 1st October, 2022. IYA Worldwide called for a true Federalism in Nigeria where all the states and other Federating organs will be given the opportunity to develop optimally, using the country’s available resources.

According to the statement, IYA Worldwide urged the Federal Government to devolve more powers to State governments in the areas of economy and security, with a view to tackling youth unemployment and overhauling the security architecture in the country. They also called on the government to revisit reports of various constitutional conferences and implement relevant recommendations.

Leadership of Igbo Youth Assembly Worldwide has enjoined the National Assembly to immediately commence deliberation on the clamour for true federalism in the country. All these calls echo several demands for restructuring the country that have been made in recent times by groups and individuals alike.

The statement added that true federalism must be allowed to be effectively operational immediately, stressing that States and local government councils must be allowed to enjoy self governance as provided for them in the Constitution.

The Igbo Youth Assembly Worldwide restated it’s position that Nigeria is in dire need to a national dialogue and a new constitution that would put the country in good stead for national cohesion and sustainable economic performance.

The Igbo youth organization maintained that national dialogue on a new constitution and true federalism constitute a veritable window “for resolving all developmental, economic and political challenges facing the nation,” saying that peace and progress are achievable if leaders were resolved on patriotism and honesty and the citizenry were law-abiding.

“There is no auspicious time than now to address the nagging issues of restructuring and true federalism in the country’s polity especially as more voices were added and have become louder on the imperative of these burning issues regarding the desired unity in the country.”

IYA Worldwide said, “These challenges are not insurmountable as we continue to hope that Nigerians will live together to build a great and perfect nation as envisioned by our founding fathers.

“True Federalism is the quest for a New Nigeria”, Igbo Youth Assembly Worldwide expressed hope that despite the prevailing sociopolitical and economic challenges facing Nigeria, the country will be great again with a genuine change of attitude of the masses, especially Nigerian leaders.