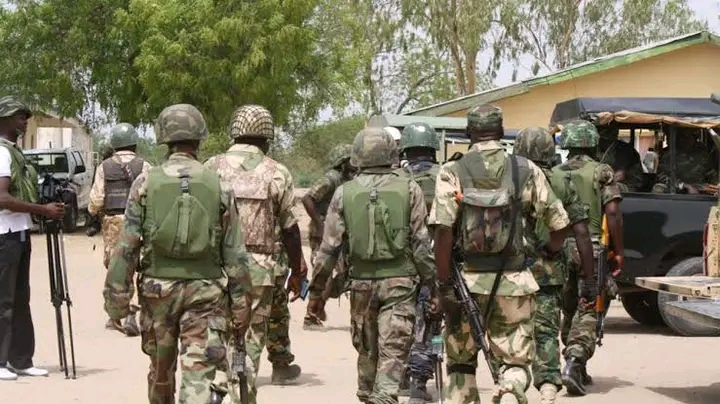 Troops of the Nigerian Army have sacked Umunze community in Orumba South Local Government Area of Anambra State in what appeared as a reprisal attack following the alleged killing of five soldiers and two civilians in the area on Wednesday.

The media had reported that seven persons including five soldiers were ambushed and shot dead on Wednesday around Zenith Bank area in Umunze town.

However, hundreds of troops were reported to have invaded the community, shooting indiscriminately, and injuring several people. The military men sacked the community while burning some houses shops, according to sources.

The soldiers who also invaded Nkwo Market in area ordered the traders to close their shops, while shooting indiscriminately causing pandemonium as everybody ran helter-skelter seeking refuge.

Apart from the Nkwo Market and all the shops in that vicinity, all the schools in the area quickly closed as parents withdrew their children.

President General of the town, Chief John Akanyeonu, who addressed journalists in Awka on Thursday evening, said the soldiers had opened fire on his people when they stormed the crime scene at about 3pm, injuring some of the residents.

He said that one of the persons who were hit by the army’s bullets died while others were still struggling to stay alive in various hospitals.

Asked what the community was doing about the development, he said: “We have made some calls to the DSS office and the DPO here. We have also called some top military officers and I think they are discussing with their colleagues to take it easy with our people.”

“All the schools around here were shut down. And there is no hope of reopening tomorrow. Because of their behaviour, people were so afraid”, Akanyeonu further lamented.

Meanwhile, a trending video on the military’s invasion showed people running away to safety, everywhere deserted. The maker of the video also showed a pellet he picked from the Nkwo Market area.

Efforts to speak with the state Police Command were unsuccessful as the spokesman, Tochukwu Ikenga, could not be reached on telephone as his phone indicated reachable. He was also yet to respond to text message.