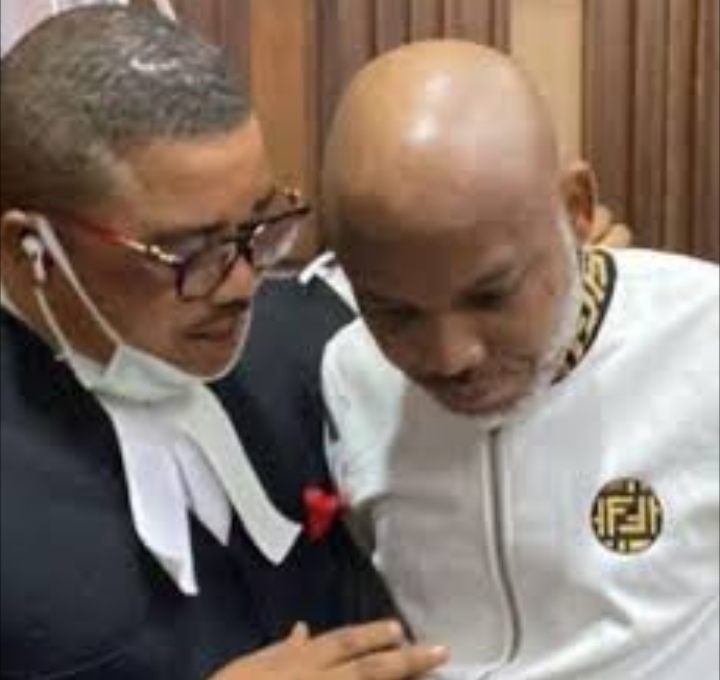 The detained leader of the Indigenous People of Biafra, IPOB,  Nnamdi Kanu, has not eaten in the past 48 hours owing to excruciating pains occasioned by his gastro intestine disorder, his lawyer, Mr. Ifeanyi Ejiofor has revealed.

Ejiofor, who made the disclosure after his team paid a routine visit to Kanu at the detention facility of the Department of State Services, DSS, on Thursday, alleged that the security agency procured substandard drugs to be administered on his client.

He accused the DSS of disobeying a subsisting court order by denying the embattled IPOB leader access to his personal doctor and medication.

A press statement the lawyer who refers to Kanu as “Onyendu”, a word in Igbo language that means leader, made available to Vanguard, read: “As usual, the Court-Ordered routine visit to  our indefatigable Client – Onyendu Mazi Nnamdi Kanu was conducted today, at the DSS Headquarters Abuja, where Onyendu is still being held in solitary confinement for over 14 months.

“Today’s visit was centered on our curiosity to ascertain the DSS level of compliance with providing Onyendu the requisite medical treatment that would address his deteriorating health condition.

“Sadly, we made startling discovery that despite the alarm raised on Monday, calling for the intervention of responsible foreign Governments and institutions, on the DSS flagrant disobedience of Orders of Court, particularly in denying Onyendu access to his personal medical doctor and medication, the lawless DSS immediately resorted to local chemist store to procure substandard drugs to be administered on Onyendu.

“Since it is now obvious that the DSS does not have the facility, capacity and/or resources to manage Onyendu’s deteriorating health condition, we are compelled  to publicly implore the DSS, to allow us have Onyendu back unconditionally, or better still, allow us to purchase the prescribed drugs for Onyendu pending his unconditional release from their custody.

“May we also seize this medium to inform the World that Onyendu has not eaten anything in the past 48 hours due to the concomitant excruciating pains occasioned by his gastro intestine disorder, which the DSS have deliberately failed to avail him with the prescribed possible medical relief.

“With this development, we are now convinced that the Federal Government of Nigeria is ostensibly afraid of the anticipated positive outcome of the Court of Appeal’s judgement.

“Hence, they are doing everything possible to subject our Client – Onyendu Mazi Nnamdi Kanu, to severe torture, and inhuman/degrading treatment before he finally regains his freedom.

“But, be assured that this strategy is dead on arrival.

“Nevertheless, we assure you, UmuChineke, that our defense team eminently led by the indefatigable Chief Mike Ozekhome, SAN, is not relenting in all actions we are taking to correct this anomaly and to put to a halt, this seemingly impunity and lawlessness being brazenly exhibited by the DSS.

“Forward ever and backward never, UmuChineke”.

Kanu is currently facing treasonable felony charge the Federal Government preferred against him before the Federal High Court sitting in Abuja.

The Court of Appeal had reserved its judgement on an appeal Kanu filed to quash the charge against him.

He is specifically praying the appellate court to review the April 8 ruling of the trial court which struck out only eight out of the 15-count charge.

Insisting that the charge FG entered against him had no basis in law, Kanu, in his appeal dated April 29 and marked CA/ABJ/CR/625/2022, applied to be discharged and acquitted.

Kanu equally urged the appellate court to order his release on bail, pending the determination of his appeal.