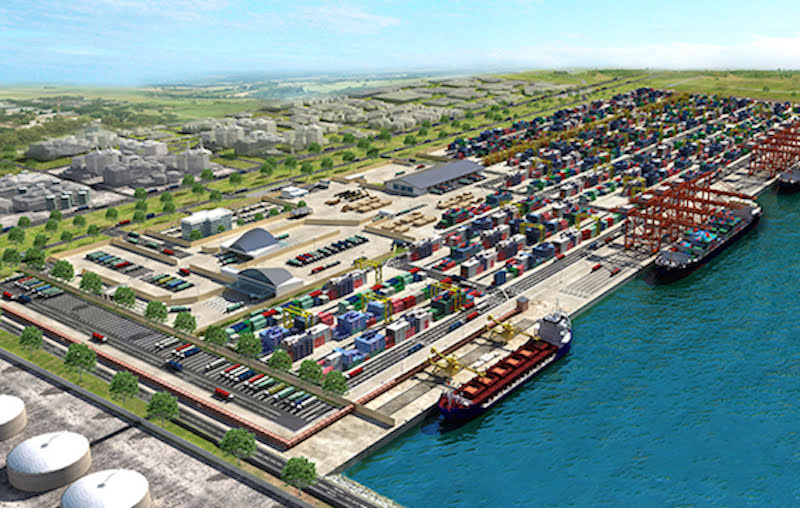 This is even as the Federal Government has provided sovereign guarantees totalling $3.306 billion and N2.72 trillion for infrastructure projects currently going on across the country, including the Lekki Deep Seaport project.

Already, some Baale (community chiefs/leaders) and rich individuals within and around the port areas have started relocating from that axis.

The investigations revealed that some of the Baale that got handsome cash compensation for lands acquired have also relocated, leaving their subjects and less-privileged behind.

A visit to the port by our correspondent showed the port is about 98 per cent completed and test run of the facility has also commenced.

Speaking to the Press on the development, Mr Olawale Domingo, a resident in Akodo, a community within the port area, confirmed the relocation of some Baale, adding that payments they got from promoters of the port facilitated their movement to more comfortable areas within the Lekki Peninsula.

Domingo also disclosed that siting the port in the area had led to a sharp increase in values of lands and properties in the axis.

He said: “Apart from the port that took a sizeable chunk of the lands from communities, some big conglomerates have acquired lands from within the port areas as well.

“Most of the Baales have relocated; they only come around when there are community issues to be discussed. Some of them now live in better areas of Lekki.”

He explained that though the port had not started operations, residents were already experiencing the movement of heavy duty vehicles, thereby compounding the already bad traffic situation along the roads.

Read Also : Cherrywood Court A Choice Place To Own House In Lagos – Powered By EUC HOMES

‘Lekki may become another Apapa’

A Baale, who spoke to Vanguard on condition of anonymity, also confirmed that they were compensated by companies operating within the port area, adding, however, that the presence of both the port and manufacturing concerns is bringing development to the area.

Another residence, Funmi Ajayi, who lives around Eleko Beach area of the port city, said though the port had not started, residents were already feeling the pressure of traffic in the area.

Although he said the roads were being expanded, he lamented that it was going at a very slow pace.

He disclosed that tankers were already loading petroleum products by a company called Pinnacle Oil and Gas, disclosing further that Dangote has also completed its own port where fertilizers and other materials are handled.

He said: “The major concern of residents is that what happened in Apapa would be replicated in Lekki, which is a major issue for us residents, but they are expanding the roads as I speak.

“They must expand the roads before the Lekki port even starts operations, but a private oil and gas company has started lifting petroleum products from that axis. There is a tank farm besides the Dangote refinery but it (the product) is not from Dangote Refinery.

“The way the people did it was that they laid big pipes from the high sea to a tank farm besides Dangote refinery. They pump directly from the vessel to their tank farm

“The major concern is the road. Even without the port starting operations, traffic in the area is getting close to that of Apapa. It is a combination of factors. Because of the real estate development in the area, there are trucks carrying sand, cement and other building materials back and forth. There are tankers moving products, so just imagine containers coming to join them.

“The pace of work on the road expansion is not as fast as expected.  The expansion is starting from Lagos, Epe into Eleko. Dangote has a port that is already functional. Vessels come to pick up fertilizers and sometimes drop some materials. There is a Naval Base there and vessels often call there.”

The Managing Director of the Nigerian Ports Authority, NPA, Mr Mohammed Bello-Koko, told Vanguard that the deep seaport was currently at 98.07 completion, adding that it would commence operation before the end of this year.

Bello-Koko also said the leaderships of both the port and barge operators are currently in discussion on how to evacuate cargoes from the port, just as the Federal Government had also approved that the port is linked to rail.

“It will reduce the pressure on Tin-Can Island Port and Apapa Port and then you will see all of a sudden, efficiency comes. Competition has set in now with Lekki Deep seaport. Other terminal operators need to sit up and do better than they are doing now. It means Nigerians now have options on where to consign their cargoes.

“That road is now being expanded, using the tax credit scheme by Dangote, and the road leading to Epe and that axis is the evacuation route. It is also being worked on and expanded. So you do not need to come to Lagos.

“There are already plans also to use barges. That discussion is already on. Promoters of the Lekki port are already discussing with owners of large-size barges for evacuation of cargoes through the waters.

“The Minister of Transportation has given the mandate that the port must be linked to the rail line. The minister is going to the Federal Executive Council, FEC, to get approval for that linkage by rail to the port. I believe by the first or second quarter of next year, the rail link would have commenced.  We are working on a multi-modal means of transportation.”

Speaking on other benefits of the deep seaport, Bello-Koko stated: “I believe that with the Lekki Deep Seaport coming up, that is fully automated, we are going to start getting back some of those cargoes lost to other ports in neighboring countries.”

Also speaking to Vanguard on the infrastructure around the port, Chief Executive Officer of the Nigerian Shippers’ Council, NSC, Mr Emmanuel Jime, stated: “I know I have spoken about this a number of times and I have expressed genuinely my concerns about Lekki port. Lately, however, I also have had the benefit of more information. So I think I’m better able to be optimistic about the Lekki seaport and, indeed, what it brings to the economy.

“Yes barging, for now, is definitely going to play a critical role, I mean in the short term. Lagos State government also, because it has a stake in the port, shares part of the responsibility to ensure the development of the road infrastructure leading in and out of the complex. I understand that some mobilization has actually been done towards that.

“So it begins to give me some degree of comfort that eventually, we are now beginning to see that there is need to install very quickly, different modes of transportation that will lead to the evacuation of cargoes.

“As at the last time the minister was there, I believe some efforts were made to identify how a rail corridor was going to be deployed that would leave Lekki and a link up somewhere very close to the standard gauge that is leading to Ibadan.

“That is also now in place so to speak, theoretically. When it will deploy, I’m not able to say because I really don’t have the details. But I think the comfort generally is that now, there is a realization that we need to make sure there are different transportation modes available to Lekki ports for ultimate evacuation of cargoes.

“You know the recognition gives me comfort because initially, everybody was acting as if it doesn’t matter, the problem will take care of itself. But now, our hands are on the deck.”

Meanwhile, the Federal Government has provided sovereign guarantees totalling $3.306 billion and N2.72 trillion for various infrastructure projects, currently going on across the country.

The single largest FGN Guarantee of $2.456 billion was provided for the Ajaokuta-Kaduna-Kano (AKK) Gas Pipeline Project being undertaken by the Nigeria National Petroleum Corporation, NNPC.

The guarantee covers 85% of the total cost of $2. 89 billion of the project, according to the 2023-2025 Medium Term Expenditure Framework, MTEF.

The document also indicated that the federal government provided a guarantee of $800 million for the Lekki Port on behalf of the Nigerian Ports Authority, NPA.

Similarly, it provided a guarantee to NEXIM for US$50 million Master line of credit from African Development Bank, AfDB, to finance part of the cost of the Export-Oriented Small and Medium Enterprises financing programme of NEXIM.

The largest single guarantee in the local currency was to the Central Bank of Nigeria for providing Nigeria Bulk Electricity Trader, NBET, payment Assurance Facility for its obligations to Electricity Generation Companies (Gencos) in the sum of N1.301 trillion

Others included the N32 billion guarantee for the Bond issued by FMBN to refinance mortgages provided for purchases of FGN non-essential residential houses. Out of the N32 billion Bonds issued, N5.238 billion was outstanding at the end of last year.

The Federal Capital Development Authority (FCDA) also got a N61.2 billion Guarantee in respect of a bank facility for Deanshanger Projects Limited for the provision of infrastructure in Katampe District, Abuja. The current outstanding amount confirmed by FCDA is N7. 440 billion.

However, NMRC was said to be financing the bond and thus had reduced the outstanding bond to N26.8 billion by 2021.

The Federal Government also provided N200 billion guarantees for the Family Homes Fund Limited (FHFL) to raise funds by issuing Debentures up to the cumulative maximum limit of N200 billion to facilitate the implementation of the National Social Housing Programme through the construction of up to 300,000 homes across the 36 states of the federation and the FCT, for the benefit of low and medium-income earners.

The MTEF indicated that as part of efforts to further develop infrastructure, there would be a growing use of off-balance sheet products such as Guarantees, Letters of Comfort, and similar instruments, by the government.

“It is expected that contingent liabilities will increase as more off-balance sheet products are used to support infrastructural development,” the document read.