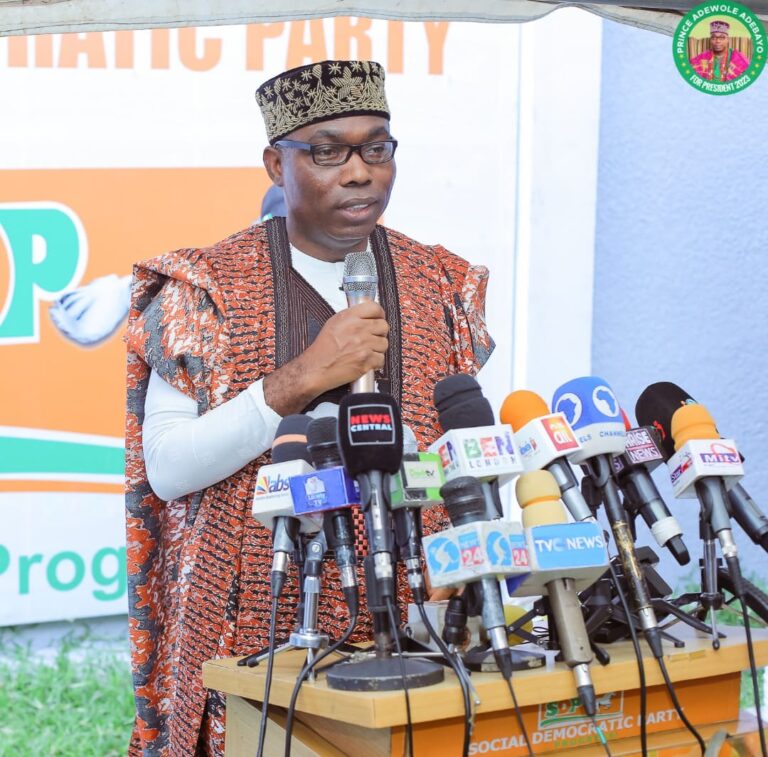 … Falae, Others Kick Against Rigging

Social Democratic Party, SDP, presidential candidate, Prince Adewole ADEBAYO, Elder statesmen, Chief Olu Falae, and a former liaison officer to President Shehu Shagari, Alhaji Tanko Yakasai, today witnessed the official commissioning of the National Secretariat of the party in Abuja where they separately vowed that the general elections in 2023 will not be rigged and urged politicians to mobilize voters and run for office.

Particularly, Prince Adewole Adebayo stressed that Nigerians needed not to cry any longer since the SDP has provided the credible alternative that the people have been yearning for to change their situation for the best.

On his part, Falae, who is now 84 years old, said in a statement following the cutting of the ribbon on the new headquarters that some believed it would be impossible to revive the SDP, but they were able to do so without resorting to litigation.

“We have a good Presidential candidate in the person of Adewole Adebayo who did not only show the knowledge of lathe w but history, anthropology, architecture a, and other fields.

“The party may not have a governor today, may not be in Aso rock, but the SDP is getting there, ” Falae said, adding that Nigeria is in crisis as a result of failed leadership.
“Nigeria today is in crisis. You can’t move without being kidnapped. I have been kidnapped for four days on my worm.

“I traveled to Lagos on foot as a young man without being kidnapped. But at 77, I was kidnapped.

“Controlling government is not a controlling party. Ask the parties, what is their philosophy, they don’t know it, they don’t have a plan, and it’s why things are getting worse.

“SDP is the only party that can restructure and revive Nigeria. More people will leave the country if things are not put right. More doctors are leaving.

“Politics is about numbers. Bring people to the party and surprise the so-called party because no one will rig the election.

Also speaking, elder statesman, Alhaji Tanko Yakasai, said the SDP should move to the grassroots and campaign adding that with the new electoral act 2022, no one will be able to rig the election.

Yakasai who was represented by the SDP gubernatorial candidate in Adamawa State, Dr .U.mar Ardo, said the electoral act made it impossible for anyone to rig the election.

“2022 electoral act is an opportunity for the SDP to make a mark as room for rigging and vote allocation have been tackled.

“What is put in the ballot box is what will be out and announced to the public. Don’t worry about not having governors. Go and talk to the grassroots because they are tired of APC and PDP, they are after alternatives, ” Yakasai said.

The presidential candidate of the SDP, Prince Adewole Adebayo said what SDP is bringing to Nigerians is just the white horse signifies victory and prosperity.

“Because poverty is ungodly and unnatural. If we don’t fight poverty, it will produce children which is insecurity.

“We are back, 30 years later, to open this office for truth, justice, and farewell to poverty.

“If you want to know if I will be a better president, I’ve chosen SDP as a platform and not as a money bag for political parties. I chose a youth banker, Yusuf Salisu Buhari as my running mate.

“SDP has the young person as the national chairman and I am telling Nigerians that the opportunity you have been looking for is here.

“We will go to all the 774 LGAs and wards and deliver victory to Nigerians where Nigerians will have sound medical care, security, and education, ” Adewole added.

The national chairman of the party, Alhaji Shehu Musa Gabam while delivering the goodwill message of Nigeria’s former President Ibrahim Babangida, urged the party to go and conquer since it was established during his administration.

“I am happy because one of the parties established during my administration is still alive. Keep hope alive, you can navigate through and bring change, ” IBB said