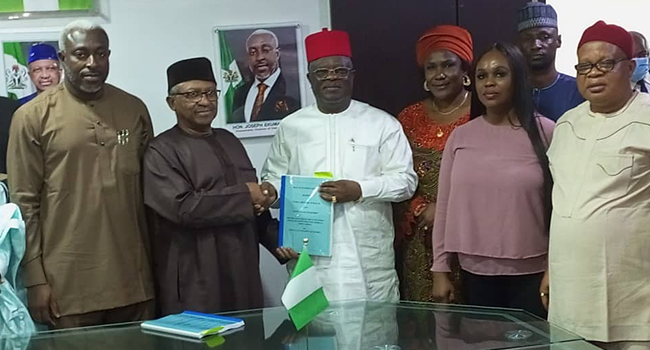 The Minister of Health, Osagie Ehanire and Ebonyi State Governor, Dave Umahi, signed an agreement on September 6, 2022, for the Federal Government to take over King David University of Medical Sciences.

The Minister of Health, Osagie Ehanire and Ebonyi State Governor, Dave Umahi, signed an agreement on September 6, 2022, for the Federal Government to take over King David University of Medical Sciences.

The Federal Government on Tuesday formally took over the ownership of King David University of Medical Sciences, Uburu, Ebonyi state pursuant to a presidential promise by President Buhari in May this year.

In a ceremony held in the conference room of the Federal Ministry of Health, Abuja, a memorandum of understanding (MOU) to that effect was signed, a statement signed by Ebonyi government spokesperson, Chooks Oko, said.

Speaking at the ceremony, Governor of Ebonyi State said the idea of the university was borne out of the desire to save the life of the people, serve them well and stem medical tourism.

“Apart from the huge revenue we would save from our people traveling abroad, we would be bringing world class medical services home. That way, we are saving the lives of our people and earning foreign exchange from the foreigners coming for treatment” he said.

Governor Umahi further explained that the beautiful university environment was beyond what a state could manage prompting the president, who commissioned it in May, to pronounce the takeover by the federal government.

Corroborating the statements of the governor, the Minister of Health, Osagie Ehanire, said the Federal Government had to take over the university because of its strategic importance to the overall healthcare plans of the federal government.

“The institution is very ready and well equipped with state of the art facilities. We have confirmed the standards and we are very excited to be taking it over. I will soon be there to physically take it over,” Minister Ehanire said.

The ceremony was witnessed by the Minister of State for Health, Barr. Joe Ekumankama, the permanent secretary of the ministry and several directors of the ministry.