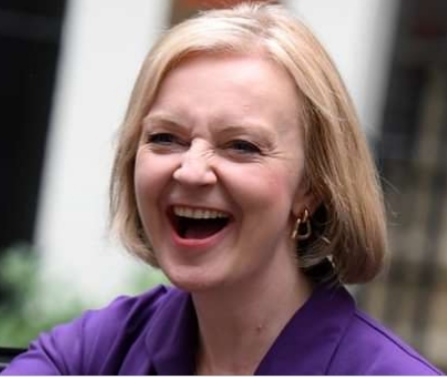 The foreign secretary comfortably beat her rival, former finance minister Rishi Sunak, by about 57 to 43 percent after a gruelling summer-long contest decided by just over 170,000 Conservative members — a tiny sliver of Britain’s electorate.

In a short victory speech at the announcement in a central London convention hall, Truss said it was an “honour” to be elected after undergoing “one of the longest job interviews in history”.

Truss vowed a “bold plan” to address tax cuts and the energy crisis.

Details are expected in the coming days.

Truss, 47, will be only the UK’s third female prime minister following Theresa May and Margaret Thatcher.

She will formally take office on Tuesday, after Johnson tenders his resignation to Queen Elizabeth II.

The leadership contest began in July after Johnson announced his departure following a slew of scandals and resignations from his government, including Sunak’s.

Truss reserved a portion of her short speech to praising Johnson’s record, including on Brexit and the Covid pandemic, and said he was “admired from Kyiv to Carlisle”.

That won warm applause from the Tory faithful present. However, the right-wing ideologue faces a tough task in winning over public opinion.

Forty-three percent said they did not trust her “at all” to deal with the burning issue of the rise in the cost of living, as energy prices and inflation generally rocket amid Russia’s war in Ukraine.

– ‘Worst in-tray’ –
The Tory winner faces “the worst in-tray for a new prime minister since Thatcher”, The Sunday Times wrote.

Millions say that with energy bills set to rise by 80 percent from October — and even higher from January — they face a painful choice between eating and heating this winter, according to surveys.

The Times and Daily Telegraph newspapers reported Monday that Truss was considering freezing energy bills for consumers, with the government reimbursing suppliers.

But polls show public support for an early general election, and the Conservatives face a growing challenge to retain their 12-year grip on power with the opposition Labour party riding high.

Truss became foreign minister a year ago after holding a series of ministerial posts in departments including education, international trade and justice.

She began her political journey as a teenage member of the centrist Liberal Democrats before switching to the Conservatives.

In 2016, she campaigned for the UK to remain in the European Union but switched allegiance when Britons backed Brexit.

Her love of photo opportunities and style of dress — posing in a tank in Estonia and wearing a fur hat in Moscow — have earned her comparisons to Tory icon Thatcher.

Her sometimes stiff style has become visibly more relaxed and allies have sought to soften her image, revealing her love of karaoke and socialising.

The announcement Monday by Conservative officials set in motion a chain of events.

For the first time in her 70-year reign, the 96-year-old monarch will appoint the prime minister at her Scottish retreat, Balmoral, rather than at Buckingham Palace in London.

The queen has been suffering mobility problems, and has cancelled a number of public engagements.

On Tuesday morning, Johnson will deliver a farewell speech at Downing Street before flying to Scotland — where heavy rain is forecast — to hand his resignation to the queen.

Truss is expected to fly separately to accept the queen’s invitation to form a new government, to ensure continuity of government in case of any mishaps.

On her return to Downing Street, the new prime minister will then give a short address to the nation. By tradition, that happens on the steps of Number 10.

But it may have to be moved indoors with forecasts for thundery downpours, matching Britain’s dismal outlook as the Truss government starts life.