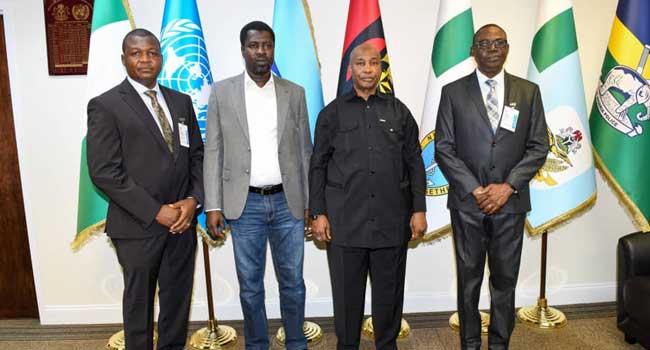 Inspector-General of Police, Usman Alkali Baba, meets with the United Nations Chiefs of Police Summit (UN COPS) in the US.

There is no security threat to the conduct of the 2023 general elections in the country.

This is according to the Inspector-General of Police, Usman Alkali Baba, who addressed the United Nations Chiefs of Police Summit (UN COPS) in the United States of America.

According to a statement issued on Sunday by the Force Public Relations Officer, Olumuyiwa Adejobi, the IGP’s assertion is based on the “robust security threat analysis carried out using global best standards to ascertain the trend of expectations for the electioneering processes”.

The police chief also met with Mr. Todd D. Robinson, the Assistant Secretary, Bureau of International Narcotics and Law Enforcement Affairs, U.S. Department of States as part of events rounding up his attendance at the UN summit.

During the meeting, discussions centered around enhancing support for the NPF training and capacity-building programmes particularly the training of tactical units deployed in the North East and other conflict theatres across the country.

The Force spokesman stated that the IGP used the opportunity of his meeting to discuss the achievement of cascading the ongoing election security management training across the six geo-political zones in preparation for the 2023 general elections.

Also not left out is the issue of support for police recruit training in modern policing themes such as forensic investigations, human relations, and cyber security.

In his remark, the Assistant Secretary praised the good work and the feats recorded by the NPF under the amiable leadership of the IGP even as both leaders discussed other ways of increasing support to the NPF.

Adejobi stated, “The Inspector-General of Police, in his quest to achieve improved policing services and bequeath an enviable policing system to the nation, has continuously interfaced with individuals and groups with requisite ideas and support-base for the achievement of his agenda of a modern Nigeria Police Force.

“The IGP, who is billed to return to the country on Sunday (today), similarly emphasized his administration’s focus on improved training and retraining of police officers and men, as well as the sustenance and improvement of cutting-edge technology for better crime prevention, deterrence, and apprehension of suspects with concrete, credible and corroborated evidence.”