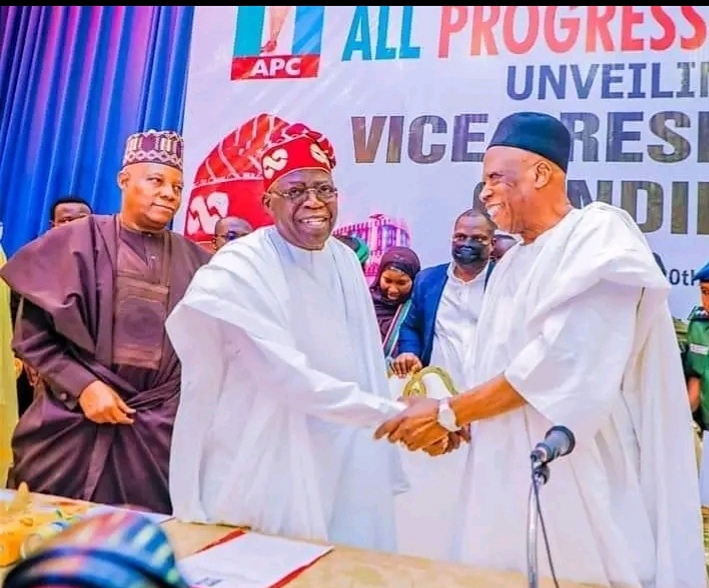 Indications have emerged to the effect that the All Progressives Congress (APC), may soon replace Abdulahi Adamu, its national chairman with a Christian with a view to placate Christians who are upset with its Muslim-Muslim presidential ticket.

Adamu, a former governor of Nasarawa State and Senator, was elected in March, despite a strong opposition mounted by APC governors.

The governors, alongside other regional leaders, had settled for Tanko Al-Makura, also a former governor of Nasarawa State and a serving senator.

The closest rival then to Al-Makura, was George Akume, a serving Minister and also a former governor of Benue State.

In the light of the opposition that has greeted the joint ticket of Bola Tinubu and Kashim Shettima, it is understood that the governors have initiated fresh moves to ease out the national chairman and see to the emergence of a Christian in his place.

About three weeks after Adamu’s emergence, specifically on the April 20, 2022, the National Executive Committee (NEC) of the party transferred absolute powers to the Adamu-led National Working Committee (NWC).

The 90 days of power transfer expired on July 22, 2022, hence the need to hold an emergency NEC meeting in September.

The National Executive Committee (NEC) is the highest decision-making organ of the party, usually presided over by the President.

Though some of the issues on the agenda of the NEC meeting are still shrouded in secrecy, a member of the NWC told our correspondent that talks about a possible leadership change in the APC were already in top gear.

He informed that last although Tuesday’s NWC meeting didn’t entertain the rumoured change, some party leaders sought some clarifications on recent developments in the party.

The reliable source, who pleaded anonymity, said the ongoing financial audit, non-payment of staff salaries and inability of the party to meet other financial obligations, were already generating concerns.

He said APC governors who are worried about the fallout of the Muslim-Muslim ticket, have resolved to placate Christians by tinkling with the nomenclature of the party hierarchy.

The NWC member said the plan is to replace Adamu with a Christian from any of the six North Central States. He declined any further information on when the changes might be executed.

He, however, added that, President Muhammadu Buhari had not been briefed of the plans, over fears that he might not support the move.

The source said some perceived ‘sins’ allegedly committed by Adamu were being compiled by the governors and other leaders, which they intend to rely on in pushing for his ouster. He listed some names being bandied as possible replacements. He said a current Minister in Buhari’s administration, is top on the list.

“Akume is Tinubu’s man,” he revealed, adding that “other acceptable names are being searched for to be submitted to President Buhari for consideration. Whether or not Buhari will accept the move, I don’t know.

“Buhari, if you remember, personally insisted on the choice of Adamu. The President also knows that Christian leaders in APC are unhappy. In the interest of reconciliation and inclusiveness, the President may just approve it.

“These issues will gain momentum as soon as NWC announces a date for the NEC meeting. The presidential candidate of the party, Bola Ahmed Tinubu, is also in support of any move that will placate Christians.

“If Tinubu decides to personally table it before President Buhari, it may work. If you recall, Adamu didn’t support Tinubu’s candidacy. He was the one who, without the endorsement of NWC, announced Ahmad Lawan as the consensus presidential candidate of the APC.

“Tinubu didn’t like that and he has expressed his displeasure many times with governors and other party leaders. Although he has not asked for Adamu’s replacement, he won’t oppose it if the move is made.

“But Tinubu has no hand in pushing for this. However, he won’t resist anything that will raise his chances of winning next year’s presidential election,” he said.

The APC NWC member noted that there were also allegations that Adamu-led NWC did not reach out immediately to aggrieved leaders of the party after the primaries.

“APC is getting very bad press. On social media and even in the traditional media, has not been getting good report.

“Whenever our members try to defend the party or the presidential candidate, the result in the media is always negative. Anything that will change the narrative will be welcome.

“These governors know that the signing into law of the Electoral Act is a game changer. We saw what happened in Osun. An incumbent governor lost. Even with Tinubu’s influence there, PDP won.

“The era of rigging is over with the new Electoral Law. Vote-buying is not a guarantee that the people will vote for you. We saw that in Osun.

“Unfortunately, the leadership of APC is too relaxed.”

“APC governors who are worried about the fallout of the Muslim-Muslim ticket, have resolved to placate Christians by tinkling with the nomenclature of the party hierarchy.

“Bola Ahmed Tinubu, is also in support of any move that will placate Christians…..He won’t resist anything that will raise his chances of winning next year’s presidential election.

“The President also knows that Christian leaders in APC are unhappy. In the interest of reconciliation and inclusiveness, the President may just approve it.”