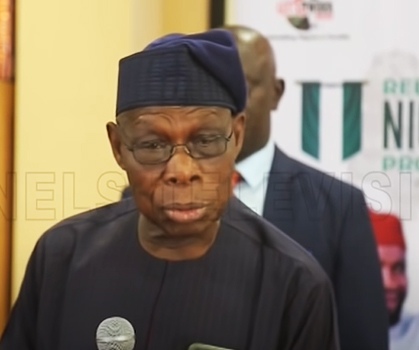 Ahead of the 2023 general elections, former President Olusegun Obasanjo has urged Nigerians to make the right choice by electing credible leaders at all levels, warning that making the wrong choice in the election may consume the nation.

The ex-President made the call while delivering a lecture on Wednesday in Lagos at the Wilson Badejo Foundation’s 15th annual lecture with the theme, ‘Overcoming the twin challenge of poverty and insecurity in Nigeria’.

Obasanjo said the country cannot afford to make the mistake of choosing bad people at the helm of affairs considering the myriads of challenges.

He bemoaned the current state of the nation, calling for more prayers as Africa’s most populous nation goes to the poll in February next year.

He had earlier said that Nigeria has not taken its rightful position because of poverty and insecurity.

“Nigeria is not what it should be today. If anybody says anything to the contrary, then the person’s head needs to be examined,” the ex-President said.

“Nobody will do it for us and nobody needs to be blamed. But the choice is in our hands. You don’t have anybody to blame.

The Independent National Electoral Commission (INEC) has fixed February 25, 2023, for the presidential and National Assembly elections and March 11, 2023, for the governorship and state assembly polls.

President Muhammadu Buhari would have completed his constitutional two-term limit by May 29, 2023, and is expected to peacefully transfer power to a democratically elected leader.

The race for the presidential election is gathering momentum gradually with the emergence of key candidates from the major political parties.

Notable among them is Bola Tinubu of the ruling All Progressives Congress (APC) his counterpart in the main opposition Peoples Democratic Party (PDP), Atiku Abubakar.

Others include ex-governor Peter Obi of the Labour Party (LP) and former Kano State Governor, Rabiu Kwankwaso of the New Nigeria Peoples Party (NNPC) and the rest.