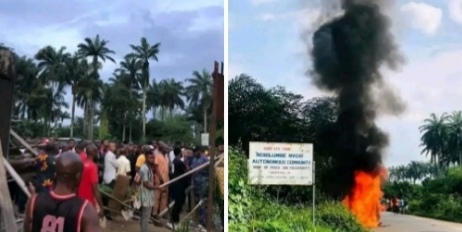 An angry mob has destroyed a mortuary at Ndiolumbe, Isiala Ngwa council area of Abia State, over alleged harvest of body parts.

The mortuary attendants were said to have fled the facility on sighting the irate youths.
The mob burnt ambulances and destroyed the facility, popularly known as Prince O Mortuary, leaving dead bodies scattered all over the premises.

Sources told Vanguard that the Ndiolumbe community has been accusing the Prince O Mortuary attendants of harvesting body parts and selling them to ritualists.

Following the destruction of the mortuary, relations of the dead stormed the area to convey the remains of their loved ones to other mortuaries located in the community.

A mortuary owner in the area who pleaded anonymity confirmed that over 50 corpses from the demolished Mortuary have been deposited at his mortuary by their relatives.

“The mortuary has always been accused of harvesting dead body parts and selling them to ritualists. There have been too many stories about Prince O mortuary. So, the youths of Ndiolumbe community decided to destroy the mortuary and burn the ambulances. It was an awful sight as corpses were scattered everywhere. Nobody could stand the odour oozing from the mortuary,” a resident of the community told.