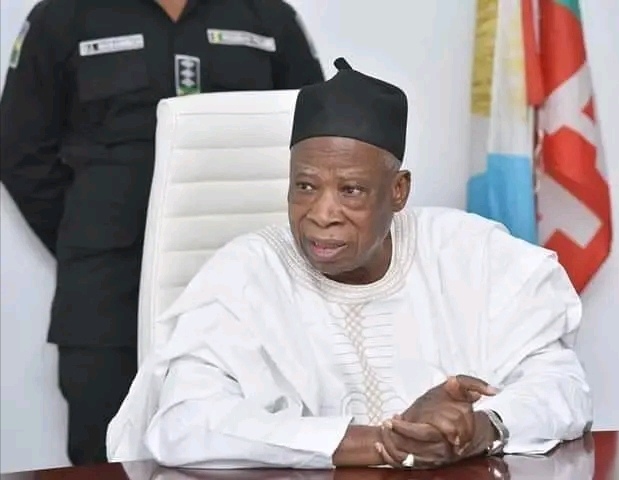 Sen. Abdullahi Adamu, the All Progressives Congress (APC), National Chairman has said the party must aim to win in every state if it is to emerge victorious in the 2023 general election.

Adamu who said this after inaugurating an eight-member Abia Reconciliation Committee therefore said the party would not be satisfied with just 25 per cent of votes cast at the general elections.

“All the national elections, House of Representatives, Senate, Governorship, likely the presidential election, we will not be satisfied with just the 25 per cent of votes cast.

Adamu expressed optimism that with the inauguration of the committee, there would be peace in APC Abia.

“No half way about it, if we are to win, we must try to win every state,” Adamu stressed.

He therefore urged party members to close ranks and work as a team to ensure victory in the forthcoming general elections.

Read Also : 2023 Elections Will Be All About Religion – Ex-SGF Babachir Reveals How APC Marginalizing Northern Christians

“We have to do some works and forget some of the prejudices and stand together.

”We don’t want anybody to come here after the elections and start crying and laying blames on us for our failures.

He said ahead of inaugurating the committee, comprehensive meetings were held between the party’s leaders in Abia.

Adamu said that they were involved in negotiations and its National Working Committee (NWC), especially during its primaries and after it.

“We are not going to hold reconciliation meetings again. We will now leave it to the leaders of the party in Abia to play their politics in the state.

“Abuja is not about Abia, go to Abia and play politics there, do the necessary, lobby and reconciliation there because all politics is local.

“Abuja is not Abia locality, Abuja is the Federal Capital Territory (FCT), we converged here from various states. Let Abia go and work together,” he said.

The Chairman of the committee, Mr Chris Adighije, in his remarks, said the committee would reconcile all aggrieved APC members in Abia.

This, he said, was critical to enable the party build strength to face challenges from other political parties

The APC National Chairman urged the members to quickly come together to work in unity.

“We are on our way back to Abia to play the local politics, reconcile all our members and ensure that we go straight for the low hanging fruits which would have lost if we don’t get together.

“And I know that by the grace of God and with the team, we are going to do the needful and ensure victory for our party,” he added.

Adighije said the party’s chances of winning APC in the coming elections were bright.

“If you look at my face very well you will know that I am an old war horse and I wouldn’t be standing here if I am not sure.

“So, we have great chance, we only have to do the needful to work together,” he said.

He added that the committee would do the needful to address every of the party’s challenges in Abia.

The Hotmedia.ng gathered that Hon. Nkeiruka Onyejeocha, Deputy Chief Whip House of Representatives will serve as secretary of the committee.

Other members of the committee are Mr Henry Ikoh, Minister of State for Science, Technology and Innovation, Emeka Atuma, Martins Azubuike and Dr Emeka Wogu, former Minister of Labour and Productivity.

The APC Abia governorship candidate, Mr Ikechi Emenike is also a member of the committee, among others.