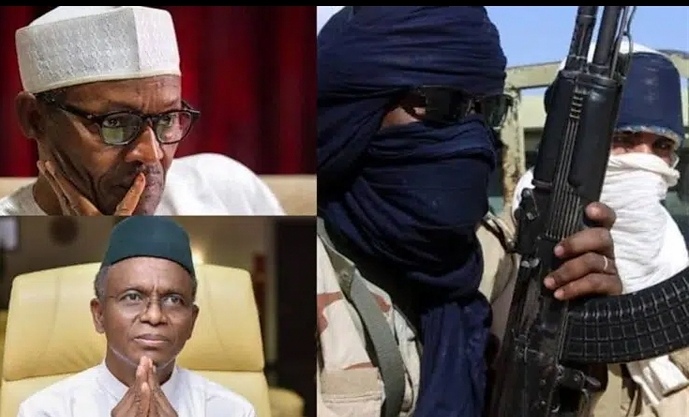 Terrorists who attacked an Abuja-Kaduna train and killed eight people have released a fresh hostage video showing their victims in an unidentified location suspected to be a forest. The victims were abducted when bandits attacked the Kaduna-bound train on March 28.

Eight passengers were killed during the train attack, while scores of persons were kidnapped.
The terrorists in a viral video during the weekend threatened to abduct and kill President Muhammadu Buhari and Governor of Kaduna State, Malam Nasir El-Rufai.

Read Also : ‘We Consider Boko Haram Terrorists As ‘Government Boys’ As Our Superiors Said Our Duty Is To Catch, Not Harm Them’ – Nigerian Soldier In North-East

They boasted that they would destroy Nigeria.
They also threatened to sell the remaining hostages, adding that they would turn the area into an abattoir if the Nigerian government failed to comply with their demands.

“This is our message to the government of Nigeria and just as you have seen these people here, by God’s grace, you will see your leaders; your senators and governors will come before us.

These ones you are seeing here, we will keep some as our slaves and sell them off just as our Imam told you in the past,” one of the terrorists said.

He further stated in Hausa: “Just like the Chibok girls that were sold off, we will equally sell these ones as slaves. If you don’t adhere to our demands, we will kill the ones we need to kill and sell the remaining. By God’s grace, El-Rufai, Buhari, we will bring you here.”

On the night of April 14, 2014, 276 mostly Christian female students aged between 16 and 18 were kidnapped by the Islamic terrorist group, Boko Haram from the Government Girls Secondary School in Chibok, Borno.

Before the raid, the school had been closed for four weeks due to deteriorating security conditions, but the girls were in attendance to take their final physics examination.

Also, 57 of the schoolgirls escaped immediately after the incident by jumping from the trucks on which they were being transported, and some others have been rescued by the Nigerian Armed Forces on various occasions.

In January, the Kibaku (Chibok) Area Development Association (KADA), on behalf of the entire Chibok community, indicated that 110 of the 276 girls abducted were still unaccounted for.