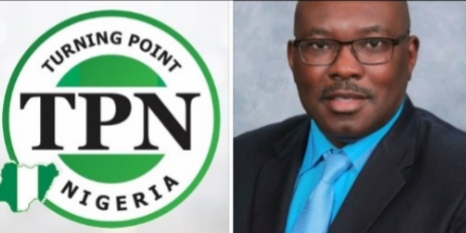 In a bid to address voter’s apathy as Nigerians look forward to the 2023 general elections through the office of the General president, Sir Oswald Chima Okebata mobilising eligible voters to participate in the ongoing Continuous Voters Registration (CVR) exercise.

The executive secretary of TPN, Casmir Irekamba who coordinated the program and excise, Says Turning Point Nigeria leadership through this exercise targets additional 20 million voters, affords Nigerians who clocked 18 years after the last exercise in 2018 and eligible voters who have never been registered, the opportunity to get their data on INEC’s database and consequently obtain a voter’s card. Mr Irekamba Stated.

The exercise will go on continuously over a period of at least one year. And for the first time in the history of Nigeria’s democracy, the electoral umpire launched an online portal for registration, a shift from the past mode where prospective voters queued for the process.

TPN also have channels through which prompt responses are provided to applicants facing any hitch during voters’ registration.

Comrade Chidi Leo of the campaigners of voters registrations excise, TPN trying to change the narrative by driving conversations that would make them vote and also, by breaking down the technicalities involved in the electoral process to the simplest forms.”

“We know that our targeted audience, the youth, use social media. So we make digital posts online heavily. We don’t post only politics but current trending affairs,” said Executive Secretary of TNP said.

The initiative, with over 50 volunteers, also relies on support from Sir Oswald Okebata, the general president of Turning Point Nigeria, who help in funding and sharing contents to reach a wider audience.

“The President of Turning Point Nigeria, Sir Oswald Chima Okebata fund the campaigns. He have a wider reach online and can circulates the campaigns around the world, Mr Casmir Irekamba told the press.

According to Sir Oswald Okebata, TPN President the cardinal objectives of the organization, seeks to organise churches and related organisations to promote and encourage active participation in the political and governance value chain in Nigeria.

We are currently setting up coordinators of the 36 states in the country and seeks to extend our tentacles to the 774 local government areas of the country.

“We want to use a bottom-top approach by involving the community. It is anchored on the principle of inclusion in which the community takes ownership of the campaign,” said Sir Okebata, the TPN President.

Since the country’s transition to democracy in 1999, it has only recorded an increase once. That was from 52 per cent to 69 per cent between the 1999 and 2003 elections.

This would further dwindle in the 2019 presidential election which saw only 34.75 per cent of the registered voters actually vote.

To put the data in a better perspective, less than four in 10 eligible voters determined who won in 2019

This analytics constitutes a larger amount of the materials that guide, Sir Okebata stated.

Hopeful:
As the pre-registration exercise progresses, campaigners have expressed hope that their advocacy would change the tide, taking a cue from the feedback received so far.

Sir Okebata said: “With close to two hundred thousand applications in the first week, we believe that our work together with that of our partners and other organisations is productive. ”

TPN, President said his organization had helped 2,903 citizens without the Internet and provided support to 1,801 citizens through social media.

INEC, during its weekly update on the online pre-registration portal on Monday, said it received a fresh 456,909 applications, being the total for the first two weeks of the exercise.

A significant number of the registrants are young people between the ages of 18 and 34.

As part of our expertise and participatory governance advocates have also encouraged the electoral commission to continue its mass voters’ education and awareness.

“INEC should make continuous work at ensuring that the biometric capturing is as seamlessly smooth as the CVR online registration,” sir Okebata advised.

This Initiative has helped the Independent National Electoral Commission (INEC) on awareness creation on the registration of eligible voters across the South Eastern states starting from Enugu state.

In his speech at the take-off of the exercise in Enugu the National Chairman Of Inter-Party Advisory Council, IPAC Hon Edwin Alor said the programme helped in improving the low number of the registered voters in the South Eastern part of Nigeria.

Alor, who disclosed that the low turnout for the voter’s registration is appalling given the population of the Ndi Igbo across the nation.

According to him, the only way to improve the low number is to take the exercise down to the various communities across the five states in the zone.

He pointed out that the organization has procured the equipment for the online registration of people in partnership with INEC to ensure that those of the voting age of 18 years and above even those in need of changing their voting centres do so at ease.

TNP will embark on many projects including supporting any government in power and attracting investors.

We have decided this time around to help our people in the voters registration to ensure that Nigerians will use their numbers during the election because Nigerians should use their numbers wisely the idea of pleading for a true democracy and good governance will be a thing of the past because power resides on the voting strength of the people. Sir Okebata explained.

“So why can’t we make use of our teeming population? As Nigerians are yearning for restructuring or referendum so what are they going to use to decide, is not the PVC? Now that over 60 percent of Nigerians don’t have PVC so we are pleading that they make use of the opportunity provided by the Turning Point Nigeria to register as quick as possible.

“Our strength lies in the PVC during the election and even when recalling any of the elected officials”.