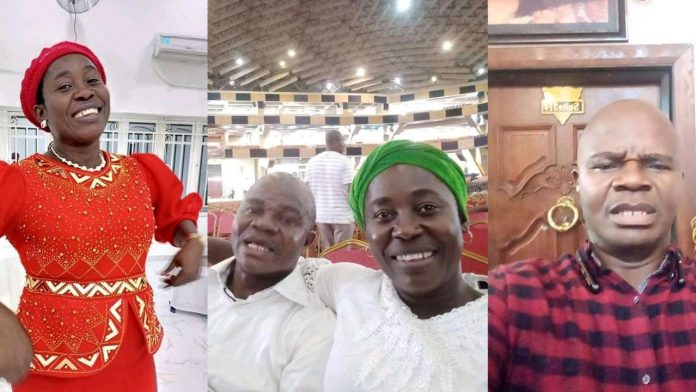 Peter Nwachukwu, husband of the late gospel singer, Osinachi, was one of those who escaped during last Tuesday’s terrorists’ attack on the Kuje Correctional Centre in Abuja, the nation’s capital.

The Islamic State-backed faction of Boko Haram, known as the Islamic State West Africa Province (ISWAP) had in a video claimed responsibility for the attack.

In the video, the terrorist sect showed some of its men were shooting their way into the facility.
According to the Nigerian government, 879 inmates escaped from the facility during the unfortunate attack.

“A total of 879 inmates escaped from the facility during the unfortunate attack.

“As at the time of this report, 443 have been recaptured, 551 inmates are currently in custody, 4 inmates dead and 16 inmates sustained various degrees of injuries and are being treated at the moment.

“However, efforts are ongoing to recapture all fleeing inmates,” Spokesperson for the Nigerian Correctional Service (NCoS), Umar Abubakar, had said.

A High Court of the Federal Capital Territory in Wuse had on June 3 remanded Nwachukwu at the Kuje Correctional Facility, pending the hearing and determination of the homicide-related suit instituted against him by the Attorney General of the Federation.

His wife died on April 8 and many of her colleagues had accused her husband of subjecting the deceased to domestic violence, leading to her death.

Nwachukwu was alleged to have kicked Osinachi in the chest, leading to a blood clot that eventually killed her.
Singer, Frank Edwards, also disclosed that an “unreasonable human” put an end to her life.

There are reports that Osinachi refused to leave the marriage despite domestic violence because of her commitment to the church.

Afterwards, the police arrested Nwachukwu and he was charged to court.
The government claimed that he contravened Sections 104 and 379 of the Administration of Criminal Justice Act, 2015; Section 221 of the Penal Code; and the Violence Against Person’s Prohibition Act  2015.

Some of the counts (such as culpable homicide) recommend death penalty, one-year jail term or fine (VAPP Act), among others.

Part of the charges read: “That you, Peter Nwachukwu, 56, male, on the 8th of April, 2022, at Aco Estate, opposite police station, Lugbe, Abuja, FCT, within the jurisdiction of this honourable court, did commit an offence to wit: culpable homicide punishable with death in that you caused the death of Mrs Osinachi Nwachukwu by your various acts of violence and aggravated assault with the knowledge that her death would be the probable consequence of your acts.

“Statement of offence: Emotional, verbal and psychological abuse contrary to Section 14(1) of the Violence Against Persons (Prohibition) Act, 2015 and punishable under the same section of the Act.

“Particular of offence: That you, Peter Nwachukwu, male, sometime between 14th November 2009 and April 2022 at Aco Estate, opposite police station, Lugbe, Abuja, FCT, within the jurisdiction of this honourable court, did commit an offence to wit: emotional, verbal and psychological abuse on Mrs Osinachi Nwachukwu (deceased) by humiliating her and making utterances like ‘you are smelling,’ ‘you are mad,’ to her in the presence of her music crew members.”