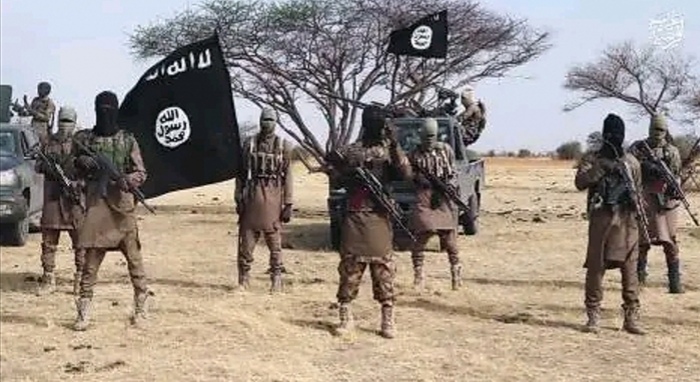 Terrorists of the Islamic State in West Africa Province (ISWAP) faction of the Boko Haram have attacked a convoy of four food trucks meant for Internally Displaced Persons (IDPs) and resettled communities in Borno and intercepted four of them.

According to Daily Trust report, the attack, which occurred Thursday night around Layi village in Mobbar Local Government Area of the state, came barely 48 hours after terrorists launched a heavy attack on Kuje Medium Security Prison in the Federal Capital Territory (FCT) freeing at least 69 Boko Haram suspects and hundreds of others.

The ISWAP on Wednesday claimed responsibility for the attack.
Top security sources who were briefed about the Borno attack, Hotmedia.ng learnt that the food and nutritional products consignment belonged to the United Nations’ agency, World Food Programme (WFP) and was on its way to Damasak.

It was part of the palliative by the WFP’ intervention for IDPs from Abadam and victims of the Boko Haram violence returning to their homes in Mobbar.

“The attackers were in four gun trucks. After heavy attacks on the convoy, they succeeded in intercepting four of the vehicles and emptied nearly everything from the vehicles,” the source said.

It was also gathered that the terrorists are now firming up their control of major roads and strategic areas in the southern and northern parts of Borno.

Intelligence sources in the area have reported that ISWAP members in four trucks have been deployed to Kareto village in Mobbar Local Government Area.

As part of their expansionist activities, the terror groups are said to have concluded plans to conduct eid prayers in some of the areas under their control, today (Saturday).

Credible sources said like what obtained in the past years, Boko Haram members loyal to late Abubakar Shekau, and those loyal to ISWAP led by late Abu Musab Albarnawi, the son of late Boko Haram founder Mohammed Yusuf, have, among others,  cleared grounds around the shores of the Lake Chad and Sambisa forest and would observe the Eid-el-Kabir prayer there.

They, therefore, called on security agencies to checkmate the effrontery of the terrorists saying they use such festivities for massive recruitments of innocent people into their fold.

One of the sources said even though, Nigerian security forces have uprooted Boko Haram fighters from many villages and forested areas in Borno and neighbouring Yobe State, they are still lurking around in many communities.

“The terrorists are fully mobilised for celebrations at many Tunbus (islands) on the Lake Chad and their enclaves in Sambisa Forest,” he said.
Another source said the excesses of the terrorists cast Nigeria in bad light at the international level.

“It is unthinkable the way they release videos of their atrocities. Such videos show that once the terrorists go out for their operations, they would do it with ease because nobody can stop them.

“The videos they released recently after the attack on Kuje prison is one bad example that showed our weak links. And unless something is done, they would also release videos of their eid prayers.

“They would release their propaganda videos slaughtering their sacrificial animals to the chagrin of those in authority…I am calling on our security forces to act by decimating them,” he said.

Another source said with the commencement of the rainy season, Nigerian troops are constrained by environmental factors which is affecting their performance.