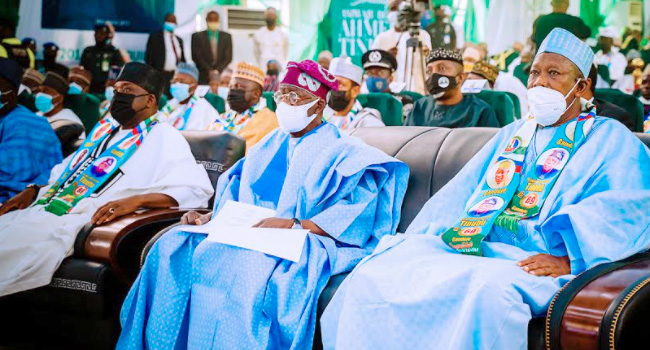 ……. Why Tinubu will pick a Muslim Vice.

He made the comment during a gathering of about 100 clerics at the Kano state government house as part of activities to mark Eid El Kabir.

“We have advised him to pick a Muslim deputy and he has agreed,” Mr Ganduje said.

“A Muslim-Muslim ticket is a reality. It is not something new in Nigeria.”

Mr Ganduje asked the clerics to pray for Tinubu to emerge as Nigeria’s president come 2023.

He also urged them to offer prayers for his administration’s peace and progress.

Mr Ganduje asked the clerics to pray for his Deputy Governor, Yusuf Gawuna, who emerged as the APC governorship candidate in Kano State for 2023 elections

Why Tinubu Will Pick A Muslim Running Mate.

There is probably no other politician in Nigeria today who recognizes the imperative of choosing a Muslim from the north of Nigeria as his running mate for the 2023 presidential election as Asiwaju Bola Tinubu does. The presidential candidate of the ruling All Progressives Congress (APC) did not come this far in his muscular political career, particularly his unappeasable bid for the presidency, by putting doctrinalcri de coeur over pragmatic political awareness. Those who were convinced that he had no chance of winning the APC ticket, given the combination of monumental conspiracies against him, are again under-estimating the man’s awesome practical political intelligence. Tinubu’s terrific thoroughness about matters of power would most likely lead him to choose a northern Muslim running mate.

This is not an argument against the “fact” that the “proper,” “ethical,” “just,” etc., etc. choice that Tinubu ought to make is a Christian from the north. Ordinarily, such a choice justifies itself. In the political balance that has been honoured in the Fourth Republic, a Christian-Muslim (or the reverse) ticket is the only “proper” and “just” platform for winning elections by any major party.

Indeed, given the nature and pattern of the consequences of fundamentalist Islam since the start of the Fourth Republic and the ethno-religious obstinacy of the Muhammadu Buhari presidency, a Muslim-Muslim ticket would seem like an insolent, even violent, slap on the face of the Christians, particularly northern Christians.

However, what those who insist on this position forget is that, before now, no Southern (read Yoruba) Muslim has been the presidential flagbearer of a major party in the Fourth Republic.

Yet, the Christian community in the country, represented by the Christian Association of Nigeria (CAN), has given voice to its total opposition to the idea of a Muslim-Muslim ticket. The body’s National President, Dr Samson Ayokunle, stated that such a ticket “would be disastrous [for] the nation.”

Ayokunle’s operative values in this regard are “righteousness, fairness and equity.” Other analysts have emphasized why it would be “indefensible” for Tinubu to ignore the religious balance that is necessary for sustaining the pact that has kept the Fourth Republic afloat. However, it seems that CAN and others who reject the possibility of Muslim-Muslim ticket are oblivious of the most important factor in Tinubu’s consideration of who would be his running-mate: electoral victory.

The APC presidential candidate’s immediate worry is not “justice” and “equity;” his burden is how to win the 2023 presidential election. He can worry about justice and equity after he has won the election. This is putting things starkly but not insensitively. In fact, the Christian community would do well to recognize what is fundamental at stake here for Tinubu and those who are invested in the ameliorative politics that is the best possible outcome of the post-Buhari era.

Political scientists, particularly those working on international politics have a name for it:realpolitik. Decisions of this nature – particularly given the very difficult circumstances that led to the emergence of two Muslims from the two inverse regions as the presidential candidates of the two major parties – are based on practical political rather than moral or ideological considerations. And no one knows that better than the “Lion of Bourdillon.”

There is one major and two subsidiary reasons why Tinubu has to choose a northern Muslim as his running mate if he wants to be Nigeria’s next president. There is only one exceptional circumstance that would recommend that he acts otherwise. The major reason is that the core north of Nigeria (that is much of what we call the North-west and North-east zones and a substantial part of the North-central) will not accept a Christian as its representative on a presidential ticket.

There is no need inveighing against this reality. It is the reality of the north as presently constituted. Tinubu, therefore, has no alternative to choosing a northern Muslim, particularly since his formidable opponent in the election is a northern Muslim. If the north already has a significant Muslim, that is, Vice President Atiku Abubakar, as one of its two choices, why should it choose a southern Muslim as its preferred candidate? What would the Islamic clerics who have perhaps the greatest influence on the electoral choices of the masses of the people of the north tell their adherents if there is no northern Muslim on a presidential ticket?

The first of the two subsidiary reasons is that it is easier to address the concerns and fears of (northern) Christians where you have a Muslim-Muslim ticket than it is to persuade the northern Muslims to accept a northern Christian as their representative on a presidential ticket. This is putting it elegantly in the latter case. Those who can be persuaded in this context therefore are the northern Christians who regard themselves as the direct victims of both moderate (dominant) Islam and extremist Islamism in the north. They are eager to break the painful cycle of violence and destruction which has been the lot of their region for so long.

Hence, their greatest need is security. President Buhari has presided over the greatest violation of their security and safety as Christians and as Nigerians. (Same is true of most Muslims in the north). Tinubu can address their fears directly and reassure them as a Yoruba (Muslim). A candidate who can convince the Christian north about the security of life and property should be able to make them see beyond having a northern Christian on a losing ticket. What is more, Tinubu comes from a culture that has 401 gods and therefore has no problem with one more!

This may be difficult to articulate explicitly in public, but Tinubu could be the representative of the Christian north (and Christians, in general) on the APC ticket. 2022-2023 Nigeria is not 1993 Nigeria. While the country has changed since the Abiola-Kingibe (Muslim-Muslim) ticket, neither the Muslim North nor the Yoruba West has changed significantly in terms of political sensibilities. And since the APC alliance, and by that token, the party’s presidential ticket, is essentially one produced by a pact between the Yoruba South-west and the North, with every other factor in place, a Muslim-Muslim ticket will not stand in the way of Tinubu’s victory, nor will it constitute any additional threat to the values and aspirations of (northern) Christians.

Those who think otherwise should go and read all the threats of fire and brimstones by Christian leaders, north and south, before Moshood Abiola announced Babagana Kingibe, as his running mate in 1993. They were the first to endorse the ticket subsequently. What was most important for the Christians was to get a president who would be fair to all Nigerians after the plague that was in power.

The second subsidiary reason why Tinubu would choose a northern Muslim as his running mate is that, in the end, barring the exit (for whatever reason) of the president, the religious affiliation of the vice president is only of symbolic value. While I am the first to admit the power of symbols, yet in the practical political challenges that northern Christians face today, there is a greater need for a president that would be fair to all than for a Christian vice president without power or influence. What was the Pentecostal Vice President Yemi Osinbajo able to do for Christians under the de facto ruleof Mamman Daura in the last seven years? Therefore, beyond the possibility of something happening to the president (impeachment, any form of incapacitation or death), there is not much for northern Christians in having one of their own as the vice president under a Tinubu presidency. The question then would be “why is this issue of symbolism not also true for northern Muslims”? It is not true for northern Muslims not only because they attach a greater importance to having a Muslim on a presidential ticket, but also because they have the electoral leverage, if not the veto power, to validate or sanction an acknowledgment or rejection of their outlook, respectively.

The only exception to what I have laid out would be if Tinubu could secure Buhari’s full support in choosing a northern Christian as his running mate. If Buhari could mobilize the mass of the northern Muslims who repeatedly supported him over five electoral circles to support Tinubu and his northern Christian running mate, then theJagaban Borgu would have cause to consider a Christian. However, anyone who has any doubt about Buhari’s innate inability to commit to some else’s project should have been convinced otherwise by the mess that he made of the process of choosing the party’s presidential candidate through his bewildering vacillation.

In the light of all this, if Tinubu would have any chance of trouncing his old political associate and mutual competitor for power, Atiku Abubakar, in the 2023 presidential election, he has no choice than to choose a northern Muslim – most probably a serving governor. It is not the choice of equity, fairness and justice. We should wish for such a choice in the Nigeria of the future.