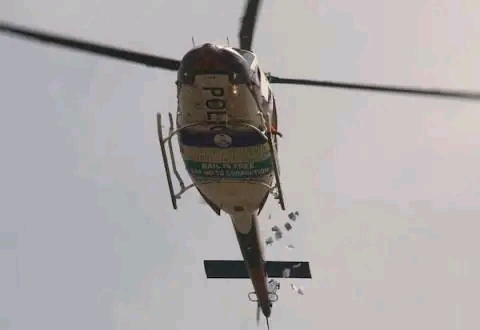 Following the coordinated terrorists’ attacks on the Kuje Correctional Service Centre in Abuja on Tuesday night, the Nigerian government has deployed helicopter to the scene of attack.

Hotmedia.ng observed that the facility had been condoned off by the security agents drafted to the scene of the incident.

A resident who spoke to our correspondent on Wednesday said that a helicopter had been hovering over their houses thereby causing panic in the area as many residents stayed indoors.

It was also gathered that some schools close to the facility were shut for the fear of possible attacks by the rampaging terrorists who may still be within the vicinity.

A prison official who also spoke to our correspondent on the condition of anonymity said they could not give the number of the officers, inmates and terrorists that were killed in the attack but said he was sure that one the Civil Defence officers attached to the facility was killed.

“I cannot give you the figure of those that were killed yet because we are still taking the record to know how many officers and inmates that died and those that escaped. They released a lot of prisoners because they attack us with bombs,” the official said.

Despite an earlier warning by the country’s intelligence service, the terrorists carried out the attack which led to the release of hardened criminals, including Boko Haram terrorists and other high profile public officers standing trial or already convicted.

It would be recalled that the Department of State Service (DSS) had recently warned of an impending attack on the Kuje prison but the government could not put any measures  in place to forestall the attack.

Meanwhile no terrorists’ group has claimed responsibility for the attack.

Most of the 700 inmates at the Kuje correctional facility in Abuja, the Federal Capital Territory escaped, Hotmedia.ng had learnt.
“Most of the inmates have escaped from the facility; it is sad. It houses over 700 inmates,” a source said.