The crack among governors elected on the platform of the opposition Peoples Democratic Party, PDP, has widened.

The body, which before now held regular meetings, has been unable to hold one since the party’s presidential candidate, Atiku Abubakar, unveiled Delta State Governor, Ifeanyi Okowa, as his running mate.

Disagreements, which started over the zoning of the party’s presidential ticket went into hibernation with the setting up of the Governor Samuel Ortom-led 38 member zoning committee. 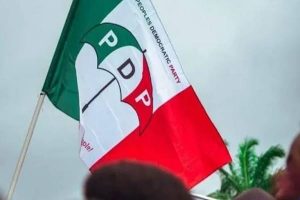 Hotmedia.ng, however, gathered in Abuja that the once cohesive power block became split down the middle as a result of the individual ambitions of members.

While governors of the party from the South aligned with their colleagues across party lines for power to shift in 2023, the party leadership prevailed on the PDP Governors’ Forum, to consider the party’s larger interest by refusing to be drawn into the internal squabbles of the ruling All Progressives Congress.

The Ortom committee recommended that the presidential ticket be thrown open, a recommendation which was upheld by the party’s National Executive Committee.

However, the outcome of the party’s presidential primary which former Vice President Atiku Abubakar won and his subsequent choice of Delta State Governor, Ifeanyi Okowa as running mate, exposed disagreements which were hitherto discussed in hushed tones.

Benue State Governor, Samuel Ortom, his Enugu and Abia State counterparts, Ifeanyi Ugwuanyi and Okezie Ikpeazu respectively and others, who supported the aspirations of Rivers State Governor, Nyesom Wike, had hoped that having emerged as first runner up, Atiku would at least have considered him as running mate.

This didn’t happen. Instead, those who supported Atiku’s decision to pick Okowa, “went to town to not only celebrate but also cast aspersions on the person of Wike”, says a party insider familiar with the issue.

The party source who pleaded anonymity in order not to jeopardize peace efforts said, “What one had expected was a genuine effort to unite the party and build peace. We have an election ahead, we cannot go into the election without first putting our house in order.”

A former National Publicity Secretary of the party, Mr. Kola Ologbondiyan, however expressed confidence that the PDP will come out of its current challenges stronger.

He explained that, “We in the Peoples Democratic Party will always face the challenge of choice because of the quality of our members and leaders. What is happening is a passing phase because what is required is the management of the outcome of a decision already taken.

“Nigerians will agree that the three persons presented to our Presidential candidate to choose from have intimidating credentials in terms of quality and their performance in various capacities in the past and presently. 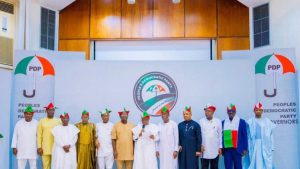 The camp of Rivers State Governor Nyesom Wike is seeking the immediate resignation of National Chairman Iyorchia Ayu as a condition for peace.

It follows overtures to the aggrieved governor by presidential candidate Atiku Abubakar.

However, the presidential candidate insisted that the chairman should remain in office to lead his campaign for next year’s election after which he will quit.

To resolve the crisis, party bigwigs are lobbying Wike to embrace reconciliation and support Atiku.

Wike and his strategists have, however, insisted on their demand that Ayu must quit.

They maintained that Atiku should honour his promise that once the PDP presidential candidate emerges from the North, a Southerner will lead the party.

But Atiku’s camp claimed that Ayu can only step aside after the election.

Sources said PDP leaders are worried that the party may not be able to win the 2023 poll if it loses swing states like Rivers, Lagos and Kano.

It was gathered that Saraki, some ex-governors, former ministers and other leaders are lobbying for Atiku.

Although Atiku was said to be amenable to reconciliation, the leaders have been worried that it was better to open fresh talks with Wike.

They felt it will be dangerous to toy with Wike because of his greater influence on the party and the Southsouth.

A source said: “The party is drifting and party leaders are concerned. The National Working Committee (NWC) is divided now. 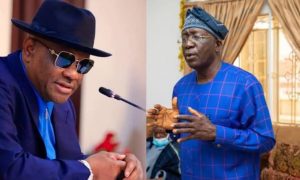 “But from Wike’s camp, a new set of power brokers is emerging. They include Governors Seyi Makinde and Samuel Ortom, ex-governor Hassan Dankwambo, Ayodele Fayose and Donald Duke, a former Attorney-General and Minister of Justice, Mohammed Bello Adoke (SAN), many senators and members of the House of Representatives.

“Disturbed by the division, especially threat to PDP chances in swing states like Kano, Lagos and Rivers states, a former President of the Senate, some ex-ministers and leaders of the party are trying to make amend. The former Senate President, now leading lobbying for fresh talks between Atiku and Wike.

In spite of the fact that Wike has made himself incommunicado to Atiku, the ex-Senate President is optimistic that PDP leaders will close ranks.”

A source in Wike’s camp gave more insight into why Wike was angry with Atiku.

The source said Atiku cannot describe Wike as unfit to be a vice presidential candidate or a liability to his mandate.

The source said: “The way the situation is going, Nigerians will soon know the truth. Wike is a committed and loyal party leader. He has been there for PDP when some leaders abandoned it.

“Wike was recommended by a committee as vice presidential candidate of the party, but some forces in the party abandoned the report without mutual consultations.

“They came up with ridiculous excuses of temperament, ambition and overzealousness. When it comes to certain challenges, Wike is useful.

“Yet, it has pleased some leaders of the party to wish him away as nobody. They came up with ridiculous excuses.

“Also, what is hurting the Rivers State governor and his strategists is that all mutual decisions agreed with Atiku were not honoured, including the one at their meeting after the presidential primaries. Atiku paid a visit to Wike in Abuja and some issues came up.

“The next thing that happened in the party was that the likes of ex-Governor Babangida Aliyu started attacking Wike. The hand was Esau’s, the voice was Jacob’s.”

The source added: “Wike is ready to draw the battle lines any moment from now because Atiku’s camp has not been forthcoming, especially on a minimum demand.

“It was agreed that once a presidential candidate comes from the North, the National Chairman of the party, Dr. Iyorchia Ayu, will step down.

“If PDP leaders cannot comply with a minimum threshold, you can imagine what will happen after the party wins the 2023 poll.”

A source in Atiku’s camp said: “It is strategically unwise to ask Ayu to step down because Atiku is yet to win the election. Our candidate is committed to North-South unity.”