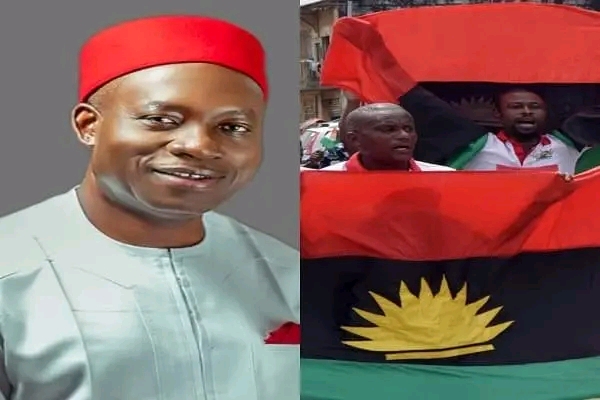 The Indigenous People of Biafra (IPOB) has called on the Anambra State Governor, Chukwuma Soludo, to speak up against the alleged killing of innocent people in Ogbaru and Nnewi South local government areas of the state by the Nigerian military.

The media reported on Saturday how troops of the Nigerian Army killed dozens of innocent young men in some communities in the Ogbaru local government area last Tuesday and Wednesday.

It reported that bodies of young men who were shot in the foreheads, heart regions, stomach and back and even penis littered one of the community’s playgrounds in Ogbaru after the military invasion. Another person who was seen sitting down and surrounded by soldiers was later shot in the head and neck by the soldiers.

Following the report, reactions have continued to trail the massacre. Some have described the incident as extrajudicial killing while some called it ethnic cleansing by the Nigerian military.

However, the separatist group in a statement in reaction to the killings, alleged that the ‘Fulani-controlled’ military was responsible for the killings. It, therefore, condemned the extrajudicial killings in the Biafra Land.

IPOB in the statement issued by its Media and Publicity Secretary, Emma Powerful, said that Governor Soludo’s “silence” in the reported massacre showed that he is now competing with his Imo State counterpart, Hope Uzodinma, in using the military to kill his people.

While admitting that there are some pockets of petty criminals in the State as obtainable elsewhere in Nigeria, IPOB, however, said “it is not enough reason for the Nigerian military to randomly be slaughtering our people like chickens.”

The statement partly read, “The military started shooting innocent people sporadically on the road and some were gunned down in their homes in Ogbaru and Nnewi South.

“Soludo, are you aware of the military exercise? Is this kind of military depopulation of your people part of the deal you entered with the enemies of Ndigbo before being voted into office as Anambra governor last November?”

The group added that IPOB and its militant wing, Eastern Security Network (ESN) operatives were doing their best to stop those perpetrating criminalities in the region.