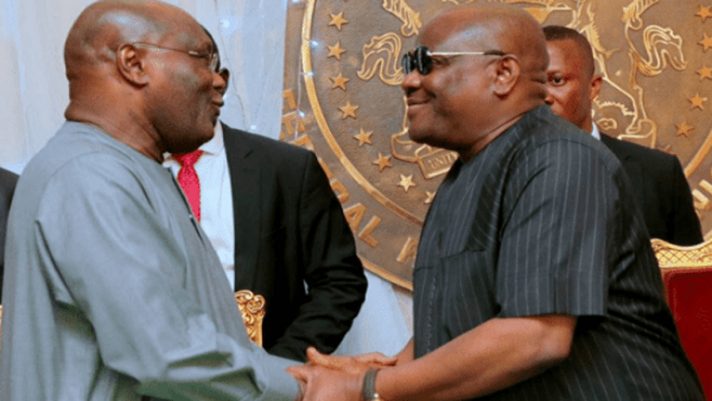 Hate or like Governor Nyesom Ezenwo Wike’s (NEW) style of politics; his objective stance on what he believes in, his refusal to call a spade by other names, or his failure for pretext to become another person in order to acquire power. Politics would have been described differently if it’s devoid of intrigues and intricacies. Those are the attributes that set the no-nonsense first class ‘Mr Projects’ Governor of Rivers State apart from the rest.

Wike’s righteous indignation – even though it’s at the realm of rumour mill that he’s about to quit the People’s Democratic Party (PDP) or abandon its presidential candidate, Alhaji Atiku Abubakar – he would not be doing the unthinkable because of the absolute injustice meted out on him in a political party that openly subscribes to equity and justice.

First, it’s difficult to believe that PDP minders in their widest imagination would allow Atiku Abubakar from Northern Nigeria to fly the party’s presidential ticket against the constitutional provisions that talked about rotation. Second, what qualifies an Atiku Abubakar to be ranked above Governor Wike who has been dubbed “PDP Conscience” for his untiring moral and financial support at a time Atiku Abubakar was hawking himself to be nominated by the APC under its presidential ticket?

What’s the reward for commitment,  resilience and party loyalty if inconsistent character, political prostitute like Atiku Abubakar who has been junketing from one political party to another without ideology should be rewarded for debasing the same PDP in the past? Why should Governor Wike support a prodigal, compulsive political opportunist whose only political deposit has been that he comes from a region with manipulated population and make-believe myths of being in possession of stolen wealth with an entitlement mentality?

It’s even more infuriating that Governor Wike who scored fourteen (14) out of seventeen (17) votes cast to nominate PDP Vice Presidential candidate was left in the cold for little known Governor Ifeanyi Okowa whose only contribution was that he opened Delta State treasury for Dollars rain on PDP delegates on Atiku’s behalf.

For a fact, the combination of Atiku Abubakar and Ifeanyi Okowa as one of the major opposition political parties has deflated the hope of Nigerians who were looking up to the party for redemption after seven years of the APC’s ruinous administration. This is because perception is everything in politics. Nigerians see Atiku Abubakar as a doyen of corruption, Fulani fundamentalist and a precursor of bloodbath.

The other day, Atiku Abubakar quickly pulled down his tweet condemning the roasting alive of Deborah Samuel after Islamic bandits threatened him with a-no-vote in next year’s presidential election. How can such unstable hermit who barely visit Nigeria from his Dubai base each time elections are around the corner be trusted?

Atiku’s missteps and Wike’s righteous indignation has become the PDP’s knew Achilles heel because you can’t step into the same river twice! It’s even more so now that Nigerians have an alternative to the leprous and vanquished APC and PDP. Nigerians are now ‘ Obedient ‘ in Labour Party!!

Erasmus Ikhide contributed this piece from Lagos Nigeria via: ikhideerasmus@gmail.com