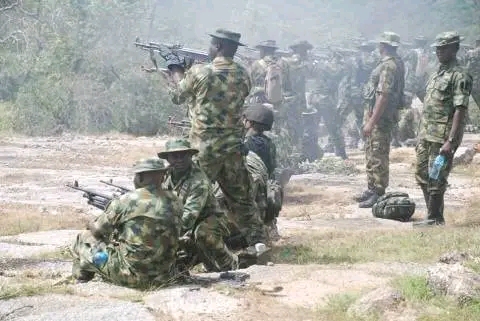 Troops of the Nigerian military comprising the Navy and the Army have reportedly killed dozens of innocent citizens in the productive age bracket in Ogbaru communities of Anambra State.

The newsmen were told that the wanton killings, it was gathered took place on Tuesday night, 28th and early hours of Wednesday, 29th June 2022 at Ossomala, Umunankwo and Obeagwa communities.

The deployment of the military personnel in the area had begun in the evening of Tuesday during which they claimed to be looking for unknown gunmen that recently laid the area under siege, according to sources.

The soldiers, according to the information available to the media, the soldiers later turned their guns on the defenceless and unarmed natives and others, while abandoning the forests where the locals said were the hideouts of the unknown gunmen located inside big river/swamp forest of Obene-Ochuche/Umuzu/Okija divided by Ulasi River.

The soldiers were said to have been mobilised from Ogbaru Naval Base and Onitsha 302 Artillery Regiment in over 20 trucks with arms and ammunition. They were said to have targeted defenceless locals mainly young males and opened fire on them at close range and killed dozens. They also wounded and arrested others who are later to be questionably labelled them as “ESN/IPOB hoodlums”.

Videos and pictures of the massacre which SaharaReporters obtained on Saturday, showed abandoned corpses shot on foreheads, heart regions, stomach and back and penis region littered in one of the community’s playground and other locations.

Relatives were equally seen crying besides corpses. Women were also seen carrying the corpses of their husbands on wheelbarrows.

In some videos, soldiers were seen placing pump action guns on top of some of the citizens killed to probably justify the massacre or their labeling as “IPOB/ESN” fighters.

They were said to have also invaded several of traditional sanctuaries and destroyed them or displayed their symbols to invariably link them to the pro-Biafra group, Indigenous People of Biafra (IPOB) and its security outfit, Eastern Security Network (ESN).

Speaking to the press on the recent development, on Saturday, security analyst who is also Board Chairman of the International Society for Civil Liberties and Rule of Law otherwise known as Intersociety, Chief Emeka Umeagbalasi, described the killings as a genocide.

Umeagbalasi said “no doubt that Ogbaru is one of the Anambra Council areas presently under the grip of syndicated criminal entities engaging in several nefarious activities including abductions, killings, armed robberies and ransom demands as well as counterfeiting ESN trademarked modes of operation by attacking security operatives and government facilities.

“Information available to Intersociety also has it that they have camps at different forests in Umunankwo and Ogwuanaocha.

“Consequently on the night of Tuesday, 28 June 2022, over twenty trucks of soldiers, arms and ammunition were mobilized and the areas were invaded in an aimless war grade operation and instead of the military personnel including Naval and Army Personnel from Ogbaru Naval Base and Onitsha 302 Artillery Regiment going into the affected Forest camps, they let loose on innocent locals, shooting them at close range including foreheads, chests, manhood and other terminal regions.

“Several or dozens were killed in the end as you might have seen in the videos and pictures of the aftermath of the invasion.

“The rampaging military personnel also went into villages and broke homes at late night, forcing scores to be killed and other defenseless natives of the affected communities to escape through River Niger and others.”

The Board Chairman of the Intersociety explained that the pictures and videos of those slaughtered showed or bore the images of passersby, returning youth farmers and occupational others.

In their usual way referring to (security agencies), he said in order to justify their conduct atrocities, “attached pictures and videos showed how they placed pump action guns on body top of some of the victims and raided traditional religious sanctuaries and destroyed them or displayed their items to make their massacre pictorially trademarked their usually concocted “ESN/IPOB mayhem or attacks or terrorism”.

He further explained that the investigation conducted did not show any evidence of the slain being killed in a gun duel as no single report of killing of soldiers or wounding them was recorded.

“The sanctity of human lives was never prioritized or considered, likewise the principles of use of force. The pictures and videos of the incident clearly connote ‘egregious and industrial scale massacre of unarmed citizens.’

“The pictures and videos also circumstantially indicated that the slain were members of defenseless locals and have nothing to do with “Unknown Gunmen” who the Nigerian security forces have severally and publicly acknowledged to bear charms preventing bullet penetration.

“Also no armed person could have been shot at such close range and killed easily that way at his terminal region without dodging and stiff defensive resistance,” he argued