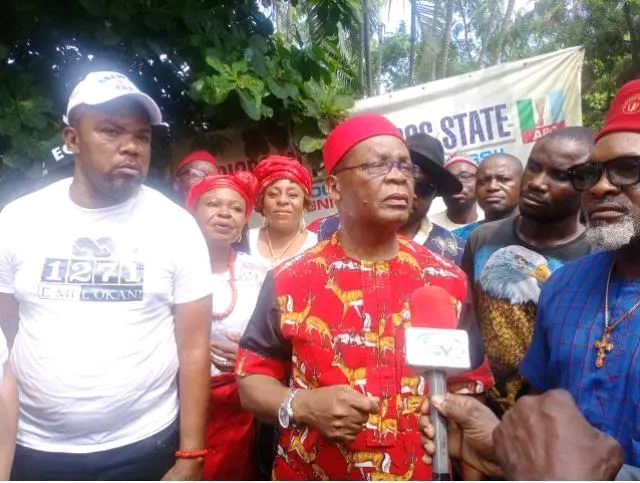 …Says Igbo must unite to get presidency

An Igbo group, under the auspices of Ndigbo in All Progressives Congress, APC, Lagos, have expressed assurance to vote en-bloc for the Presidential Candidate and National Leader of the party, Asiwaju Bola Tinubu in the 2023 presidential poll.

The leader of the group and Special Adviser to the state Governor, Babajide Sanwo-Olu, on Drainage and Water Resources, Joe Igbokwe, declared this at a crucial and special meeting of the group, held in Ikeja, Lagos.

Igbokwe stated; “We are Ndigbo in APC Lagos and we will remain bona-fide, patriotic and committed members of APC Nigeria, come what may.

“We are not ethnic bigots, we believe in Nigeria. In America there are Democrats, there are Republicans and other political parties. Democrats and Republicans exist in every state in America. Minus the Red Indians other Americans today are immigrants.

“They came from diverse cultures across the world; the Europeans, Africans, Indians, Jews, Latin, Hispanics, Arabs, Russians, Asians, among others and they all melted into the American pot.

“That notwithstanding, they still to recognize till date who they are and where they are coming from. This is diversity .This is Democracy. It is a free choice.

“We are Igbo in APC Lagos. We live here, some of us were born here, we went to school here, we do serious and monumental businesses here in Lagos, we own markets, we own estates, we own schools, hospitals, transport companies, Shipping companies, among others.

“Lagos is our home. We will vote for APC presidential candidate in 2023. His name is Asiwaju Bola Ahmed Tinubu. This is democracy.”

“Nigeria has almost 300 ethnic groups with Igbo, Yoruba and Hausa-Fulani as three major ethnic groups. It means that we must be at peace with other Nigerians, work with them, support them so that they can support us.

“We cannot do it alone. Politics is a game of numbers. You cannot box yourself to a corner and expect others to come and beg you. Everything is earned through dint of hard work.”

He stressed that for Igbo to attract attention, sympathy and love from other Nigerians, “we need to stop hate speech, primordial sentiments, ethnic bigotry or ethnic preoccupation, we see every other day in the past five years.

“We must stop abusing other Nigerians, stop the bloodshed in the South East, stop burning peoples’ homes, stop beheading our brothers and sisters, stop attacking security agents and security formations, stop destroying the economy of South East, stop kidnappings, stop looting in the name of agitation for Biafra.

“Dialogue, round table and face to face conversations will help to bring equity, Justice and FairPlay. Let us change the narratives and our approach. A lot is at stake. Igbo investment across Nigeria is too monumental to be ignored or toyed with.”

Igbokwe, therefore appealed to the host community, the Yoruba Nation not to use whatever offense committed by one Igbo or a group of Igbo to think all Igbo in Lagos or any other place for that matter are all culprits.

“We are not. We witnessed this during #ENDSARS protest. The blame was pushed to us I know what some of us went through. We need to do due diligence in matters like to separate the chaffs from the real grains,” he stated