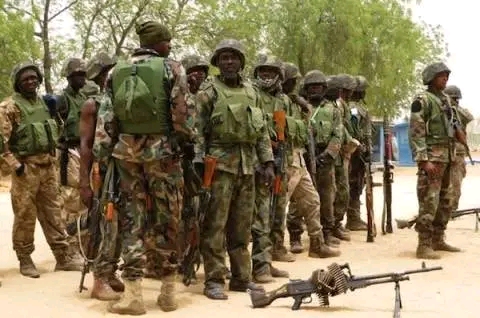 There is disquiet presently in the Nigerian military as some officers and soldiers of the Nigerian Army are said to be planning to storm Abuja, the Federal Capital Territory, to protest over unpaid emoluments, poor working conditions and others.

The report emerging is that officers and soldiers, mainly those prosecuting the war against insurgency in the North-East and other parts of the country, said they had perfected plans to stage a one-day protest against the leadership of the Nigerian Army.

According to the source who pleaded for anonymity, the protest was intended to expose the rot in the operations of the Nigerian Army under General Faruk Yahaya, the Chief of Army Staff.

He stated that the operations of the Nigerian Army had been marred by ethnic and religious jingoisms that favoured only a segment of the army.

“General Yahaya has done what no other Army Chief has done in the history of the Nigerian Army. He has divided the Nigerian Army along religious and ethnic lines. You are not considered an officer if you do not share a certain faith or religion, which has affected operational efficiency numerous times,” a Colonel told SaharaReporters.

“Let me tell you this, the present leadership crop of the Nigerian Army is busy making retirement plans. Contracts are shared amongst themselves, monies meant for troops on the battlefront are diverted to private pockets, allowances of soldiers are not paid, and it is generally an atmosphere of delusion in the army as we speak.”

The media gathered that the army authorities were making efforts to avert what they tagged the “embarrassment of the year should the soldiers embark on the protest.”

A source added at that the army authorities had issued directives to all Divisions and Commands to withdraw all passes granted to officers and soldiers and direct those already permitted to travel to return to their bases immediately.

“All commands of the Nigerian Army have been directed to suspend the issuance of a travel pass to officers and soldiers. It was a terse statement from the Army Headquarters some days ago, with a warning to ensure strict compliance,” a captain at the army headquarters also told SaharaReporters.

This fact was buttressed by the surge in the requests for passes experienced in North-East Nigeria and other areas with ongoing military operations.

A soldier currently engaged in an operation in one of the states in North West stated that the surge in requests for passes was because the bulk of the soldiers in operation had gone through exacerbating conditions in operations.

“Our allowances are unpaid; we don’t have food or water. Maybe our “Ogas” in Abuja want us to perform magic. We have not experienced such in the history of the Nigerian Army. Even the police and other paramilitary services are doing better than us. All of this started under General Faruk Yahaya,” he said.

“This is a shame for the Nigerian Army. Other people have been Chief of Army Staff before him. Was this how he was treated? Our prayer is for President Buhari to sack him immediately; else there will be problems.

“The President must do something urgently. I can tell you that there is a rumble in the barracks. The soldiers are not happy. The suffering is too much, and we are now a laughing stock in the Armed Forces.”

Earlier in March, their counterparts in the Nigeria Police Force said they would embark on the warning strike to protest poor working conditions, poor salaries, lack of genuine welfare benefits and outdated weapons.

A protest tagged “We are tired of negligence” was also scheduled to be held at the Eagles Square in Abuja to reiterate their demands to the Nigerian government.

The officers had condemned the continuous killing of their colleagues by armed robbers and terrorists, without adequate compensation for their families.

They had accused the Nigerian government of lying about the increment of police salary and other promised benefits and demanded improved conditions of service, particularly salary increase and provision of modern weapons as they tackle the security challenges facing the country.