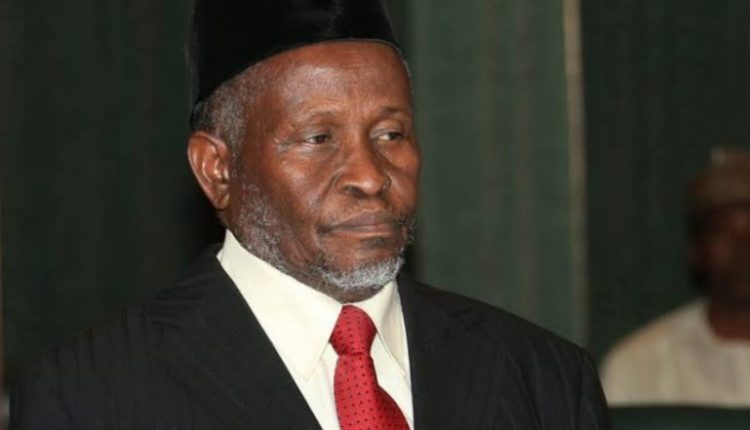 Hotmedia.ng can authoritatively confirm that the jurist cited health ground as reason for his decision.

Chief Justice Of Nigeria  (CJN),  Justice Ibrahim Tanko Muhammad, Who Was Appointed On 22 March 2019  Has Resigned On Health Grounds.

Ibrahim Tanko Muhammad in the letter which he copied to the Attorney General of the Federation, Abubakar Malami, cited ill-health as the reason for his decision.

Information also has it that arrangements are now on to swear in the next most senior justice of the Supreme Court, Justice Olukayode Ariwoola as the acting Chief Justice of Nigeria.

Reports also indicate that a formal announcement will be made shortly.

Until his resignation, reports had it that Justice Tanko Muhammed was seriously ill.

Only last week, 14 justices of the Supreme Court had written him a letter to lament the decrepit state of affairs in the court

The media had reported how 14 justices of the apex court wrote to him, complaining about their welfare and alleged denial of access to training.

In a protest memo signed by 14 Supreme Court judges, Muhammad was accused of not giving justices their legitimate entitlements.

The justices said their annual foreign training, meant to enhance capacity building for the country’s judicial process, had been blocked by Muhammad.

The main issues put forward by the justices in their letter through a welfare committee were; non-replacement of poor vehicles; accommodation problem; lack of drugs at the Supreme Court clinic; epileptic electricity supply to the Supreme Court; increase in electricity tariff; no increase in the allowances for diesel; lack of internet services to residences and chambers.

He was also accused of diverting their housing, vehicles and electricity allowances into his personal pocket and that of his children’s political ambitions.

Hotmedia.ng had exclusively reported that two sons of the Chief Justice of Nigeria emerged as the Senatorial and House of Representatives candidates of the All Progressives Congress and Peoples Democratic Party respectively in Bauchi State.

While Siraj Ibrahim Tanko emerged as the APC candidate for Bauchi North, his brother, Sani won the ticket of the PDP to represent Shira/Giade federal constituency in Bauchi State at the lower chamber of the National Assembly.

“The Justices reiterated the fact that they are serving this country diligently and to the best of their ability and as such deserves the best compared to how they are being treated by the present CJN,” a top judicial officer had told our correspondent.

“The Justices reminded the CJN of the facts that they resolve disputes between the Executive and the Legislature including all manner of disagreements, between governments and individuals and how it would be a tragedy if the Nigerian Public were to know that they are unable to resolve their own problems internally without going public due to neglect and lack of taking to corrections by the CJN.

“The Justices demanded that the CJN act before it is too late as all efforts in the past to resolve their complaints had yielded no result. The Justices recall that the CJN reluctantly called a Justices’ meeting on the 23rd day of March 2022 after several persistent requests to hold the meeting.

“The Justices recalled that at their meeting of the 23rd day of March 2022 they tabled and discussed their demands on:

“They also raised the issue of the failure of the Honourable Chief Justice to carry the Justices along in managing the affairs of the Court as well as the deteriorating condition of services generally. They frowned on how the CJN reneged on the agreement that the welfare committee be constituted to compile and forward their demands which were submitted to the CJN for his review.

“The welfare Committee submitted their request for diesel allowance, because of the epileptic electricity supply, the astronomical hike in the price of diesel and the fact that Justices require electricity to work at home. The Committee also requested for the restoration of their monthly Internet allowance, because they require uninterrupted Internet service in order to have access to materials online to write their judgments but the CJN ignored these demands since 24th March 2022.

“The worse part of the CJN corruption is the fact that some Justices sworn in since the 6th day of November 2020 were yet to be accommodated by the Court as they lived in their rented apartments with the attendant risks attached to the same. With regard to Justice’s vehicles, several justices are due for vehicle replacement, while the new Justices have not received their full complement of vehicles to date. Moreover, some of the vehicles supplied to the Justices are either refurbished or substandard.

When contacted, the Special Adviser on Media and Communication to CJN, Ahuraka Yusuf Isah, said, “All I know is that he’s going to declare open a workshop this morning at the NJI (National Judicial Institute).”

A spokesman for the Supreme Court confirmed the development to Peoples Gazette on Monday morning, but said additional details would be made public as to its cause.

Body of Benchers raises peace panel as Supreme Court justices fight CJN
Other attempts to reach close associates of the CJN, such as Dr Mike Ozekhome (SAN), proved abortive as they didn’t take their calls.

Following his resignation, Justice Olukayode Ariwoola will be the next Acting Chief Justice of Nigeria, following Senate’s confirmation.