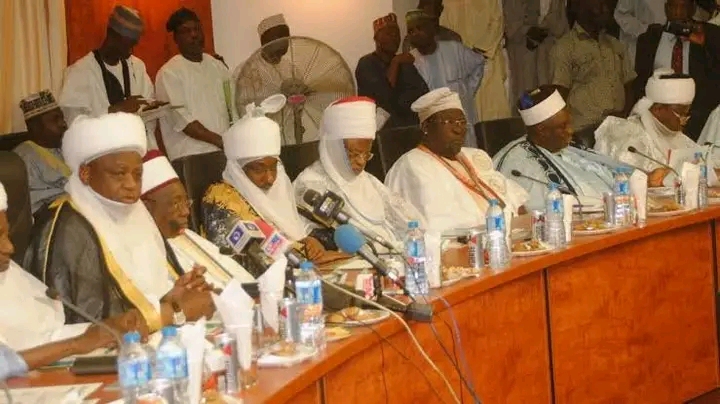 The Convener of the Northern Elders Forum, NEF, Professor Ango Abdullahi, has said Nigeria will be in chaos if either Bola Tinubu of the ruling All Progressives Congress or Atiku Abubakar of the Peoples Democratic Party wins the 2023 presidential election, stating that the duo have nothing to offer the country.

He said the presidential candidates of Labour Party, Mr. Peter Obi and that of the New Nigeria People’s Party, NNPP, Senator Rabiu Musa Kwankwaso are better, compared to Atiku and Tinubu.

He told newsmen that Tinubu and Atiku had been around political circles for a long time without commensurate positives to show for it.

However, he noted that Vice President Yemi Osinbajo who contested the APC presidential primaries or a former banker, Mohammed Hayatu-Deen, who also aspired for the ticket in the PDP would have made a better President as technocrats.

Hence, Abdullahi, who was a former Vice-Chancellor of Ahmadu Bello University, ABU, Zaria, said he would not support any of the candidates.

Abdullahi said he would rather tell Nigerians to brace for the trouble ahead of them should Tinubu or Atiku emerge as the next President.

“No, we still haven’t got the man who we think will fix Nigeria. What we have on (the) ground is not good enough. How can you look at Tinubu and Atiku to say they are the ones who will fix this country?

“They have been on the ground for the last 25, 30 years and so on. What have they done? What are we looking for? I was the one who encouraged a technocrat to join this consensus. You probably had seen Mohammed Hayatu-Deen in the group of people going around looking for consensus arrangements in PDP. I was one of those who encouraged him. We haven’t got the materials on the ground, unfortunately.

“Peter Obi, unfortunately, I don’t know him that much. He is a young man; he was the former governor of Anambra State and he is a businessman.

“He (Kwankwaso) is a good, young man. He started his politics with us and he is quite smart. No doubt about it. Of course, he had some of these debts that he acquired or he must have picked in other political formations and so on but clearly, he is one of the bright ones around. No doubt about that.

“I believe we have not had a good array of politicians. With due respect to some of them that one saw contesting, I am not being selfish here by referring to certain people like Prof. Osinbajo. He is a quality material but the political system will not tolerate him,” he told Vanguard Newspaper.

Abdullah further stated there was nothing bad if Osinbajo contested against his supposed godfather, Bola Tinubu.

He continued: “What has it got to do with what Nigeria wants? Is he a slave to the former governor? I don’t understand this kind of analogy. Professor Osinbajo is a human being entirely on his own merit and his accomplishments are entirely his own and people should assess him as such.

“Those who needed his services asked for his services. When he served as the attorney general of Lagos State, he was invited by the political system of Lagos State. This is the way I look at it and when he became vice president, I understand it is the president/party that identified him as qualified and competent enough to be the vice president in the current dispensation.”

“Why shouldn’t he be because he served under XYZ? He should be identified as an individual for leadership in the country,” he added.

While asking Nigerians to prepare for the troubled days ahead should any of the candidates become president in 2023, Abdullahi said:  “What I will tell Nigerians is that we are in trouble and the way out is for Nigerians to agree that Nigeria is in trouble and that the machineries that are on ground today, that are expected to find solutions to the challenges facing Nigeria are not appropriate and we have to go back to the drawing board to see what we can do to save the Nigeria of the future.

“I believe the politicians have failed. My belief is that the political class has over the years failed to produce the kind of quality leadership we require to deal with the problems of Nigeria and which means that we should look for quality materials, not necessarily within the mainstream political parties, from outside and there have been a lot of discussions in Nigeria recently about technocrats.”

One thought on “2023: Nigeria Is In Trouble If Tinubu Or Atiku Becomes President – Northern Elders Forum”