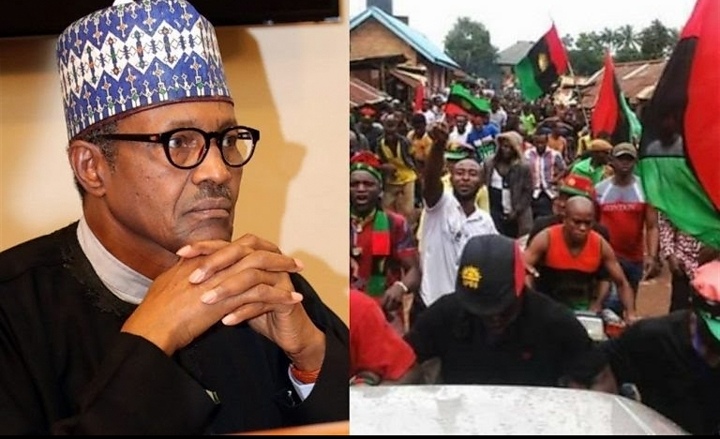 President Muhammadu Buhari has again called on western allies to designate the Indigenous People of Biafra (IPOB) as a terrorist organisation.

Buhari disclosed this in his written responses to questions posed by Bloomberg News.

The President accused IPOB of pipeline and infrastructure vandalism.

“Criminality and terrorism in oil-producing regions hamper production, and it would help if our western allies designated IPOB as a terrorist group, given their complicity in damage to pipelines and infrastructure,” he said.

“We have invested in our security forces, including the $1 billion military deal with the U.S. for the acquisition of A-29 Super Tucano aircraft.

“These efforts are making an impact: wells that had to be closed due to criminality have now re-opened. With these efforts, OPEC has raised our quota for next month.

“We urge those same international partners to take additional steps costing them nothing, by proscribing another group – IPOB – as a terrorist organisation.

“Their leadership enjoys haven in the West, broadcasting hate speech into Nigeria from London, spending millions lobbying members of the US Congress, and freely using international financial networks to arm agitators on the ground. This must stop.”

In 2017, the Nigerian government proscribed IPOB, designating it a terrorist organisation.

In recent times, the proscribed group has been accused of perpetrating violent attacks in the South-East in order to achieve its secession agenda but IPOB has repeatedly denied being behind the attacks.